Week two of Friday Night Touchdown featured a Game of the Week between two dynamic programs and rivals.

**Be sure to click here for all final scores** 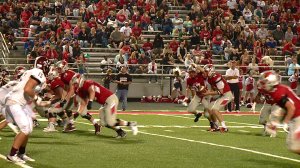 The game was a tough match-up, but the points kept rolling in. Mentor defeated St. Ignatius 63-56, scoring the game-winning touchdown with just 8 seconds left.

Tracy McCool is the special guest host and she traveled to Copley to cover her alma mater against Akron Firestone. Copley snagged a swift 48-0 win.

**CLICK HERE to head over to our photo gallery**

The commissioner of Friday Night Touchdown, Dan Coughlin took the 'Coughlin Cam' on a west side jaunt. He took in the battle between rivals Avon Lake and Avon, where Avon took the 31-7 win. He also headed to Bay to see Streetsboro invade, but Bay took a 48-0 victory.

NDCL was feeling good after pulling out a week one win at Willoughby South. The Lions were at Chagrin Falls where the Tigers were recovering from a loss to Kirtland. The Lions came out on top though, taking a 35-11 win.

SkyFox took to the sky as well. One of the games they saw was Akron St. Vincent-St. Mary on the road tangling with another parochial power: Walsh Jesuit. Akron SVSM came out on top though, defeating Walsh 34-10.

There were several more games on the schedule, all told, more than 20 games. Check above to see the final scores for the night.

CLEVELAND (WJW) -- For years protesters have been calling for the Cleveland Indians to change their team name, and now it may finally be happening.

The team announced in a statement on Friday that it's open to the possibility.

KANSAS CITY (CNN/AP) -- The NFL plans to have the song "Lift Every Voice and Sing" -- known as the Black national anthem -- performed live or played before every game in Week 1 of the NFL season, a source familiar with the league's discussions said on Thursday.

The news was first reported by The Undefeated, which is owned by ESPN.

City of Akron celebrates 4th of July with neighborhood based fireworks