CLEVELAND – Richard Jefferson took to his favorite form of social media on Wednesday night to announce some big news.

He shared that he signed a 2-year deal with the Cleveland Cavaliers. 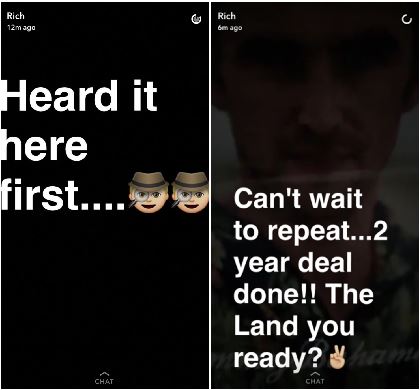 The deal has not been confirmed by the Cavaliers, but Fox 8 has reached out to them for comment.

After the Cleveland Cavaliers won the 2016 NBA Finals, Jefferson said he was retiring. But at the victory parade he told fans he would stick around another year.

Jefferson even included  Lil Kev  in the annoucement.

The joke about Lil Kev started earlier in the playoffs when Jefferson spotted a Tommy Bahama ad with a model who resembled Kevin Love.

The joke blossomed from there and Lil Kev became the team’s unofficial mascot.

Throughout the playoffs, Jefferson has chronicled his and Lil Kev’s shenanigans on his Snapchat, RJeff24.

More on the Cavaliers here.

Still have Beatlemania? Check out these fab products …

Whether it’s wall art, vinyl albums, a t-shirt or some other memorabilia, you can embrace and proclaim your undying Beatlemania with these items.

If you’re looking for a top-notch multipurpose case, here are the best phone cases that do more than simply protect your phone.

How online predators are targeting your kids

3 Ohioans on guest list of State of the Union address

T.J. Edwards and the Watt Rivalry That Fuels Him

Chiefs’ Eric Bieniemy Reflects on Losing Out on Head …

Verducci: How Tom Brady Made Wild MLB History by …

This Former Football Star Is on the Cusp of a WWE …

How online predators are targeting your kids

Intruder breaches base of Air Force One, shot fired

3 Ohioans on guest list of State of the Union address