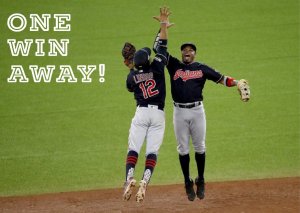 CLEVELAND, Ohio — The Cleveland Indians have a three-games-to-none lead in the AL Championship Series after their bullpen tossed 8 1/3 innings to lead a 4-2 victory at Toronto.

The Indians went through six relievers once starter Trevor Bauer had to leave the game due to a cut on the pinkie finger of his pitching hand.

Jason Kipnis broke a 2-2 tie with a solo homer in the sixth after Mike Napoli supplied a solo shot and an RBI double in his first two at-bats.

Corey Kluber with start Game 4 at 4 p.m. If they win, Game 1 of the World Series will be Oct. 25 at Progressive Field.

If the Tribe does not win, Game 5 will be tomorrow afternoon.

Ohio lawmakers agree on statue for John Glenn at the statehouse

HOUSTON (AP) — Collin Sexton had 39 points and the Cleveland Cavaliers handed the hapless Houston Rockets their 12th straight loss with a 101-90 victory.

The Cavaliers have won four straight after losing their previous 10 games.

‘He has no fear’: Strongsville teen with severe vision loss disease just keeps on swimming

“I was kind of scared because we never dealt with anything like that,” says Caleb's Dad, Ron Webb.

YOUNGSTOWN, Ohio (WKBN) -- Youngstown State University assistant coach Tim Johnson will not be permitted on the sidelines for the remainder of the season after he was caught on video hitting an opposing player.

In the video, you can see Johnson (in white) lower his shoulder into University of Northern Iowa wide receiver Quan Hampton as he runs out of bounds, knocking the player down. The television broadcast video went viral on social media Saturday afternoon.