Who sold more gear, Dez Bryant or Odell Beckham Jr.? Which linebacker sold the most stuff?

A new list reveals the top 50 NFL players with the most merchandise sales. The individual players keep about two-thirds of the revenue from the gear they sell, while the rest goes to the players union and into a pool for all players.

The list below takes into account all sales from March 2015 through February 2016, and was released Tuesday by the NFL Players Association.

Below is the list of players, broken down by how much they brought in: 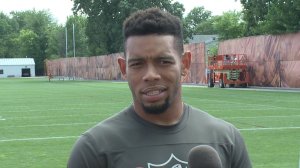 BEREA, Ohio (WJW)-- The Cleveland Browns signed running back Dontrell Hilliard from the practice squad, the team announced on Wednesday.

The Browns originally singed Hilliard, who's in his third season out of Tulane, as an undrafted free agent in 2018. He appeared in 25 games with the Browns, logging 13 carries for 49 yards with two touchdowns.

Can Cookie save the season? Cleveland Indians need a win tonight to keep the season alive

CLEVELAND, Ohio (WJW) – The Cleveland Indians had a bad night.

CLEVELAND (WJW)-- The New York Yankees dominated the Cleveland Indians in the first of a best-of-three American League Wild Card Series. The final score was 12-3.

Shane Bieber, the favorite to win the Cy Young, had not allowed more than three runs in 12 starts this season. That changed Tuesday night.

‘These five relish it’: Gray parrots separated at zoo after swearing a blue streak

Target squares off with Amazon, sets Oct. 13, 14 for beginning of holiday shopping season

‘I will always tell you the truth’: Joe and Jill Biden train tour launches from Cleveland

From ‘Will you shut up man?’ to ‘Everyone knows he’s a liar,’ first presidential debate goes off the rails

Hillary Clinton responds to ‘would you shut up, man’ moment at presidential debate

Fact check: A look at claims from Trump and Biden’s first debate