OAKLAND, California – Several Cavaliers players, including Kyrie Irving and LeBron James, spoke to the media in Oakland on Wednesday, just one day away from the start of the NBA Finals.

Kyrie said keeping up with his knee issue is an adjustment, but he wills himself to play. He added that the Cavs will be ready for Game 1, despite injuries.

“It’s just about 2 teams who have worked extremely hard all year to compete for a championship. Just trying to be prepared for Game 1,” Kyrie said.

***Fox 8’s PJ Ziegler will be reporting live – with all the inside info – from Oakland when the Cavs are on the road.***

LeBron said that he knows Cleveland has a lot of expectations for this team and it’s time for a championship. 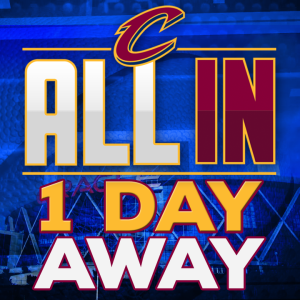 “I understand drought our city has been in as far as a championship. Huge motivation inside of me to get it done,” LeBron said.

He reiterated that although these games are the biggest of the season, it’s still just basketball.

“It’s a court, it’s basketball, 10 guys, 3 refs, 20,000  fans. Game doesn’t change. Fans here are awesome. I’ve been to so many loud arenas. It’s just basketball. Don’t put too much into experience. We’ve been playing championship basketball over the past two and a half months. Not changing,” LeBron added.

The Cavaliers are set to face the Warriors in Game 1 of the NBA Finals on Thursday night at 9 p.m.

We want to see your best Cavs spirit! Click here to send your Cavs fans photos to our photo gallery.

For all of the Cavs playoff coverage, click  here and Go Cavs!

The entire NBA Finals schedule is below:

CLEVELAND (WJW) -- The Cleveland Browns are still licking their wounds from their beatdown at Heinz Field last week, but as the great Bill Belichick once said, we’re on to Cincinnati.

“No. 1, you have to own it, No. 2 you have to learn from it, and then once you do those two things you have to move past it,” said Browns Head Coach Kevin Stefanski.

Justin Fields completed 20 of 21 passes for two touchdowns and ran for another, Master Teague III rushed for a pair of scores and Ohio State rolled over Nebraska 52-17 Saturday on the opening day of the Big Ten's pandemic-delayed season.

FNTD: Get all the latest high school football scores

**Watch last week’s Game of the Week in the video above.**

CLEVELAND (WJW) — FOX 8’s award-winning “Friday Night Touchdown” is back for its 24th season and better than ever.

With Charlie Brown specials gone from TV, here’s how to watch them for free

Want to play Pac-Man in the real world? You need a Caterpillar vehicle for this wild Illinois maze

Days away: We’re counting down to daylight saving and extra sleep

‘We vote because there is so much at stake’: Kamala Harris campaigns in Cleveland Saturday

Netflix set to release 71 movies next month, including some holiday flicks