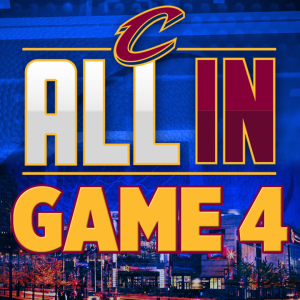 CLEVELAND, Ohio — Wednesday was a day to celebrate — today, it’s back to work!

And the Cavaliers are ready to take on the Golden State Warriors at the Q in Game 4 of the NBA Finals.

The streets will be filled with fans just wanting to be a part of the atmosphere. Police have increased security, and they are cracking down on illegal scalpers.

As for the team, they enjoyed a day to rest, recoup, and in the case of Matthew Dellevedova, to get rehydrated. Delly has been a superstar in the finals.

And LeBron James is setting new records, too. His 123 points in the first three games is an NBA Finals record.

According to Elias Sports Bureau, when the NBA Finals series is tied at 1-1, the winner of Game 3 has gone on to win the series 84 percent of the time.

*Show you’re #ALLinCLE right here, by sending us a photo*

*Join in the Cavs conversation on social media right here!*

*Continuing coverage on the Cleveland Cavaliers*

NEW YORK (WJW) -- National Basketball Association Commissioner Adam Silver has set a target date for the league to resume playing, according to Sports Illustrated. The NBA season was suspended in March due to the coronavirus pandemic.

CLEVELAND, Ohio (WJW) — Not long after quarterback Baker Mayfield spoke of getting back to basics, some Browns employees are returning to the the office starting June 1, the organization announced today.

With COVID-19 throwing so many unknowns into the Browns' upcoming season, the organization said the return to its Cleveland and Berea facilities is the start of Phase 1, and that many new safety measures are in place — including that some employees will still work from home.

Back to fundamentals for Browns quarterback Baker Mayfield

Motorcyclist killed in crash on I-77 in Summit County