Here's how it all started:

Legend has it that a Chicago tavern owner named Bill “Billy Goat” Sianis pronounced a curse on the club on October 6, 1945 — just a month after the end of World War II.

Sianis went to Wrigley to cheer on his beloved Cubs against the Detroit Tigers in the World Series, according to the tavern website, which dedicates a page to the Billy Goat curse.

For Game 4, he purchased a ticket for himself and one for his pet goat Murphy, thinking it would bring the Cubs luck.

But ushers stopped Sianis from entering with Murphy. Sianis appealed directly to then club owner P.K. Wrigley, asking him why he couldn’t take his personal mascot to the game.

“Because the goat stinks,” Wrigley replied, according to the Billy Goat Tavern.

So Sianis threw his arms up and cursed the team.

“The Cubs ain’t gonna win no more!” he declared.

So in the spirit of keeping the curse of the billy goat alive, Fox 8 News in the Morning invited some billy goats down to the set at Progressive Field. These particular goats come from Haulin' Goats in Valley City and they brought along their pro-goat, anti-Cubs signs with them.

***Fox 8 is your official World Series station - you can watch all the fun only on Fox 8. We'll be bringing you continuing coverage of all the games*** 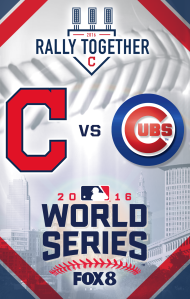 The folks from Haulin' Goats said that the idea to use their goats came upon them when the Cubs clinched the National League Pennant Saturday night.

Also at Progressive Field ahead of Game 1 was Al Mancuso, his daughter Rachel, and their goat, who we are told  is an Indians fan. (As if you couldn't tell by his blanket!)

Here's hoping that the curse of the billy goat holds true! And to help it along a bit, Fox 8 has designed a Tribe lover appropriate profile picture for your Facebook page: 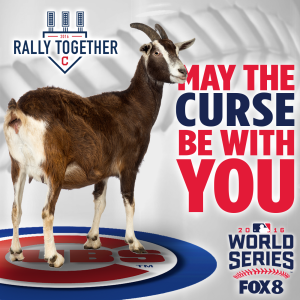 WASHINGTON (CNN) -- The National Football League's Washington Redskins will officially announce Monday that the team will be changing its nickname, according to multiple reports.

Although the team is expected to announce the change of name, the new name will not be announced until a later date due to trademark issues, according to Sports Business Daily. Head coach Ron Rivera told The Washington Post in an interview he was working with team owner Daniel Snyder on a name that would honor both the military and Native Americans.

ORLANDO, Fla. (AP) -- LeBron James says his thoughts on social justice can't be contained on the back of a basketball jersey.

The Los Angeles Lakers superstar won't wear one of the NBA-approved social justice messages on the back of his jersey when the NBA resumes competition later this month in the Orlando bubble.

The Cleveland Indians' free-swinging slugger and outfielder apologized Thursday for endangering his health — and putting his teammates at risk — by not wearing a mask while attending a holiday party last weekend.

It’s National French Fry Day; here’s where you can get fries for free

Driver found dead inside vehicle after crash in Medina County

Kelly Preston, actress and wife of John Travolta, dies at 57

‘Beyond devastated’: Son of Lisa Marie Presley, grandson of Elvis dead at 27

52 confirmed cases of COVID-19 reported in City of Cleveland