If you think you’re a big Browns fan, one man may have you beat!

Garrett Howenstine, 20, is so pumped for this season, he got a Cleveland Browns Super Bowl champs LIV tattoo.

Garrett said he started talking about it as a joke, and then realized the team really has a chance to win.

He says he’s expecting that to happen, so he made it official.

Garrett is originally from Cleveland, but he goes to school at Ohio State. 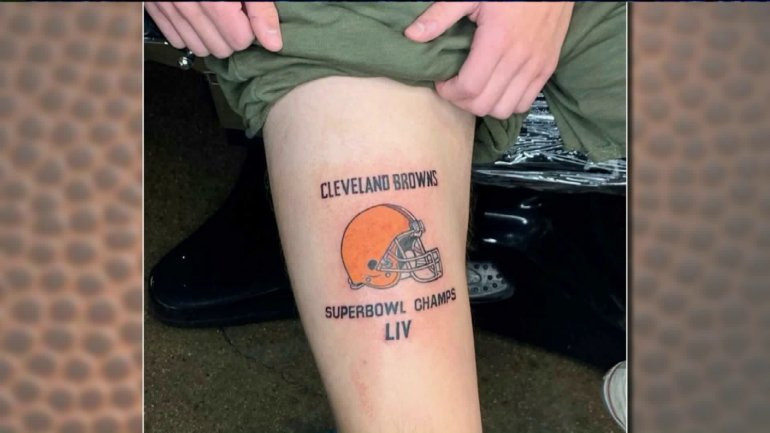 Fans are particularly pumped for this season thanks to so many great players including Baker Mayfield, Jarvis Landry and Odell Beckham Jr.

Sports Illustrated featured the Browns on its recent cover with the headline, “Bold Prediction! Cleveland’s First Division Title in 30 years — Can they win SB LIV?”

**More stories on the Browns**

KANSAS CITY, Missouri (CNN) -- The NFL's Kansas City Chiefs have signed their quarterback Patrick Mahomes to a 10-year contract extension that his agent says is the most lucrative contract in sports history.

CLEVELAND (WJW)-- The Cleveland Indians released their 60-game schedule for the 2020 season on Monday.

The Tribe opens the season at home against the Kansas City Royals on July 24. It'll be very different from the originally-scheduled home opener on March 26: without fans and with considerably warmer weather.

(AP) — The National Hockey League and NHL Players’ Association announced a tentative agreement Monday to return to play this season and extend their collective bargaining agreement by four years.

The CBA deal, coupled with both sides’ agreement on protocols for training camps and games, paves the way for hockey to resume in less than a month. Training camps would open next Monday, July 13, and games would resume Aug. 1 if the league’s board of governors, players’ executive committee and full membership sign off.

Heat or ice? Show us how you’re keeping cool in this summer heat wave

How Legacy Village is keeping shoppers safe amid coronavirus pandemic

FDA adds to list of hand sanitizers to avoid, making it 14 total