DETROIT, MI – The Cleveland Indians are the 2016 AL Central Champs. 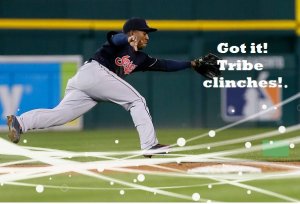 The team took the title by beating the Detroit Tigers Monday night, 7-4.

It’s their first divisional title since 2007.

Kluber left after four innings with right groin tightness, joining Carlos Carrasco and Danny Salazar in a group of talented Cleveland pitchers dealing with injuries. But even those concerns were secondary when the Indians poured onto the field to celebrate their first division title since 2007.

Cleveland last made the postseason in 2013 as a wild card.

Coco Crisp and Roberto Perez homered for the Indians, and Jason Kipnis doubled in a run.

Buck Farmer (0-1) allowed four runs in five innings for the Tigers, who fell two games behind Baltimore for the second AL wild card.

Carrasco, who made an inspiring comeback last season after being diagnosed with leukemia, is getting an MRI. The Indians said he will not work out Thursday and the team plans to provide an update on his status Friday.

The Browns tweeted that Landry is expected to make a full recovery for the 2020 season.

Are you ready for some more football? Reports say NFL wants to expand season

According to multiple reports, the CBA proposal will increase the regular season to 17 games, shorten the preseason to 3 games and add a playoff team from each conference.

What your dreams are telling you: Cleveland psychic analyzes what happens when we sleep

Wanted: Half a million workers to help count people for the census

Canton police look for group who robbed teen with autism