FOX 8 News in the Morning 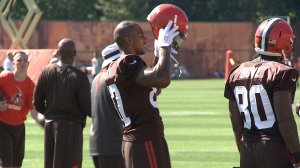 Pryor was in training camp this summer with Cleveland but was one of the last players cut. The Browns were intrigued with his potential but decided not to keep him.

However, with wide receivers Andrew Hawkins and Taylor Gabriel sidelined with concussions, the Browns had a major need at the position.

Pryor can also play quarterback, which could give the Browns some insurance with McCown out for the season. McCown was injured in the fourth quarter of Monday night’s 33-27 loss to the Ravens.

COLUMBUS, Ohio (AP) — A grand jury on Friday indicted two former Ohio State football players on charges of rape and kidnapping after authorities said they held a woman against her will and raped her earlier this month.

HILLIARD, Ohio (AP) — Dozens of girls from across Ohio will compete in the first girls wrestling state tournament this weekend.

The Ohio High School Wrestling Coaches Association is sponsoring the tournament that will take place Saturday and Sunday at Hilliard Davidson High School near Columbus.

GOODYEAR, Ariz. (AP) — Cleveland Indians right-hander Carlos Carrasco has been diagnosed with a mild strain of his right hip flexor after feeling discomfort while doing squats in the weight room during spring training.

The team said Friday that Carrasco was considered day to day after an MRI revealed the strain.

Mother of child hurt in hit-and-run talks to I-TEAM, says she’s determined to find the driver

‘It’s traumatic and cruel’: Some Michigan lawmakers want to make it illegal to declaw cats