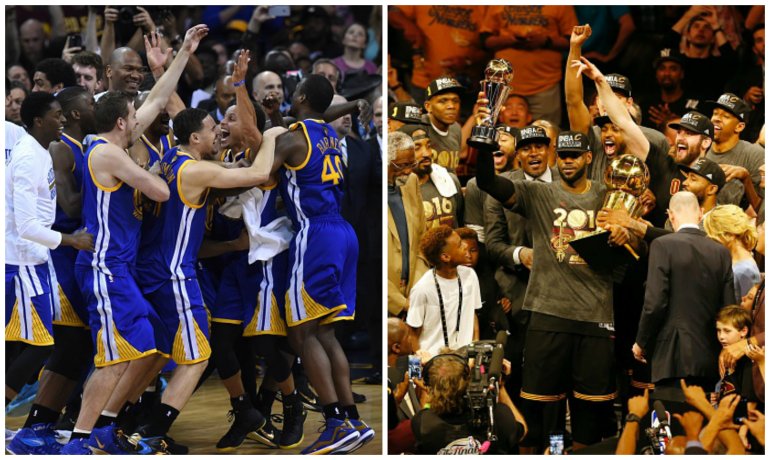 CLEVELAND, Ohio — This NBA Finals rubber match between the Golden State Warriors and Cleveland Cavaliers has been building up for a while.

In 2016, it looked like everything was going the Warriors’ way. The 2015 NBA champions won a record 73 regular-season games, and Stephen Curry was the first player to unanimously win the NBA MVP Award.

The Warriors were back in the NBA Finals, and they had a 3-1 lead against the Cavaliers, the same team they defeated for the championship the previous year.

But it all evaporated. And in Game 7, with LeBron James notching a triple double plus a massive block and the dagger three-point shot from Kyrie Irving, the Cavaliers won the game and the title, ending a sports championship drought the city of Cleveland had been living under since 1964. James wept on the Warriors home court in Oakland, where he was named unanimous NBA Finals MVP.

After this year’s lackluster NBA playoffs, buckle up: The Warriors and Cavaliers are back in the NBA Finals for the third consecutive year. Golden State punched its ticket by sweeping the San Antonio Spurs in the Western Conference finals, while the Cavaliers finished off the Boston Celtics in five games to win the Eastern Conference.

This is the first time the same two teams have faced off in three consecutive NBA Finals, and it’s the matchup that most NBA fans — and Warriors majority owner Joe Lacob — wanted.

“Honestly, I don’t really care who we play,” Lacob said, per The Mercury News, after the Warriors swept the Spurs. But then he added this: “OK, maybe a slight preference for Cleveland. Only because I feel we have some unfinished business from last season.”

The Warriors are 12-0 in these playoffs, becoming the first NBA team to accomplish the feat after dispatching the Trail Blazers, Jazz and Spurs.

And they’re doing this without their head coach. Steve Kerr, who is still experiencing complications from back surgery two years ago, hasn’t been on the Warriors’ sideline for more than a month. Warriors assistant coach Mike Brown has filled in as interim head coach.

Kerr is still involved, albeit donning sweatpants. He’s been present at practice and recently traveled with the team at the end of the Warriors’ sweep against the Spurs. But it’s uncertain if Kerr will return to the bench for the NBA Finals. “Just day by day,” Kerr said to The Undefeated’s Marc J. Spears when asked of his plans.

After the Cavaliers won the title in 2016, the focus turned to a player who wasn’t in the NBA Finals: Kevin Durant, who was entering free agency after his team, the Oklahoma City Thunder, had blown a 3-1 lead against the Warriors in the Western Conference finals. It spurred the most frenzy surrounding an NBA free agent decision since James announced in 2014 that he would return to the Cavaliers after spending four seasons with the Miami Heat.

On July 4, with a 351-word post on The Players’ Tribune, Durant announced he was joining the Warriors. Now he’s four wins away from winning his first NBA championship.

“I’m just proud of the work we’ve put in from the beginning of the season,” Durant said following the sweep of the Spurs. “We just kept grinding. We didn’t talk about championships or anything. We just wanted to build good habits and have fun playing some basketball, man. Simple as that. It’s good that we’re here now. Obviously we want to take that to the next series and try to be great and see what happens.”

Can LeBron and the Cavs do it again?

Meanwhile, the Cavaliers have been rolling as well, sweeping the Pacers and Raptors before dominating the Celtics in five games.

But for the third year in a row, the Cavs enter the NBA Finals as the underdog. In 2015, James had to carry an injury-depleted roster and came up short in six games. Last year, Cleveland became the first team in NBA Finals history to come back after trailing the series 3-1.

Can the Cavs do it again? It starts with James, who is in his seventh consecutive NBA Finals. Just six other players have made it to at least that many in a row, and they all were part of the Celtics’ dynasty, which spanned the 1950s into the 1960s.

In Game 5 against the Celtics on Thursday, James passed Michael Jordan as the leading all-time scorer in playoff history. After torching the Celtics for 35, James now sits at 5,995 postseason career points.

“When you’re growing up and you’re seeing Michael Jordan, it’s almost like a god, so I didn’t ever believe I could be Mike,” James said. “I started to focus on myself, on other players and other people around my neighborhood because I never thought that you could get to a point where Mike was.”

He continued, “So I think that helped shape my game. I think the biggest thing for me sitting here today after breaking the all-time scoring record in playoff history is that I did it just being me. I don’t have to score the ball to make an impact in the basketball game. That was my mindset when I started playing the game. I was like, ‘If I’m not scoring the ball, how can I still make an impact on the game?’ It’s carried me all the way to this point now, and it’s going to carry me for the rest of my career because scoring is not No. 1 on my agenda.”

James still trails Jordan in one key area: titles. Jordan won six championships in six NBA Finals appearances, while James is is going for his fourth.

A Warriors’ team bent on revenge stands in his way. Get the popcorn ready.

NEW YORK (WJW) -- National Basketball Association Commissioner Adam Silver has set a target date for the league to resume playing, according to Sports Illustrated. The NBA season was suspended in March due to the coronavirus pandemic.

CLEVELAND, Ohio (WJW) — Not long after quarterback Baker Mayfield spoke of getting back to basics, some Browns employees are returning to the the office starting June 1, the organization announced today.

With COVID-19 throwing so many unknowns into the Browns' upcoming season, the organization said the return to its Cleveland and Berea facilities is the start of Phase 1, and that many new safety measures are in place — including that some employees will still work from home.

Back to fundamentals for Browns quarterback Baker Mayfield

Motorcyclist killed in crash on I-77 in Summit County