CLEVELAND, Ohio – A pretrial date has been scheduled for a woman accused of stealing a car with a 4-year-old inside outside a Cleveland gas station. 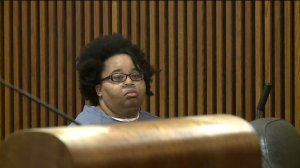 Cleveland police say Hunter was caught on surveillance video outside a store at East 152nd Street and St. Clair Avenue trying to break into vehicles.

Police say Hunter took a vehicle that was left running.

That vehicle had a little girl inside.

A woman had run into the store, leaving her 4-year-old daughter in the backseat.

Surveillance video showed several witnesses blocking Hunter’s exit, as the child’s mother was being dragged, according to police.

She entered a not guilty plea to charges of kidnapping.

The judge set a pretrial for March 25.

*Watch our previous report above showing protesters taking part in a march in Lorain.*

ALLIANCE, Ohio (WJW) -- Protesters across the country are continuing to march in the name of George Floyd and against police brutality.

CLEVELAND (WJW) -- The Rapid Transit Authority is making changes to its service in response to the city issued curfew for downtown Cleveland.

The curfew remains in effect until Tuesday, June 2 at 8 p.m. and impacts downtown as well as the Market District in Ohio City.

YOUNGSTOWN, Ohio (WKBN) - A curfew for the City of Youngstown is now in effect after protests turned violent on Sunday.

Mayor Tito Brown applauded those who remained peaceful, but said to ensure safety for all citizens he enacted the curfew.