CLEVELAND, Ohio– Does it give a hint about Dwyane Wade’s future? Or.. maybe it means nothing. There has been talk on social media about whether or not Wade could be considering a move to the Cleveland Cavaliers.

And.. now, something the Cavs just did is fueling those rumors. The last two people they  followed on Twitter? Dwyane Wade and his wife, actress Gabrielle Union. 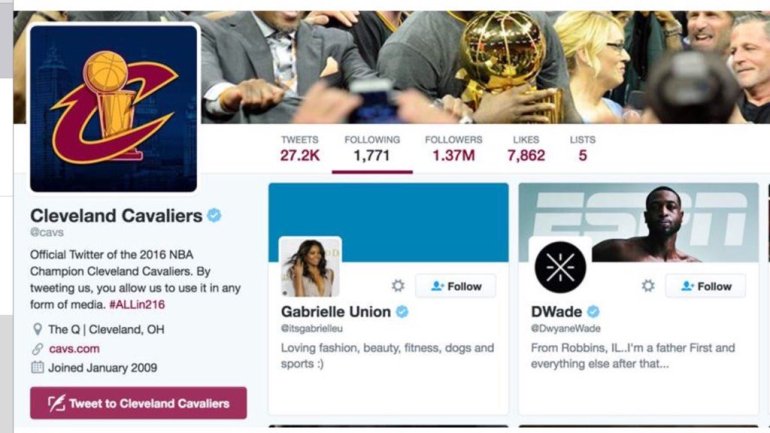 The Cleveland Cavaliers aren’t alone; the last person the Cleveland Indians followed on Twitter? You guessed it: Dwyane Wade.

When someone Tweeted at the Indians asking them, “what’s up with the most recent follow?” the Indians replied, “Huh? What do you mean?”

Huh? What do you mean? https://t.co/kV9zPuCdjr

According to records on Thursday listing of all Florida fatalities, the child was only described as an 11-year-old female from Broward County whose infection is not believed to be travel related.

ELYRIA, Ohio (WJW)-- As Lorain County becomes the latest county in Ohio to fall under the state's mask mandate, the sheriff's office is asking for people's patience and cooperation.

On Thursday, Lorain County moved from Level 2 to Level 3 on the Ohio's Public Health Advisory Alert System, which assesses risk for coronavirus. That elevated level triggers an order requiring people to wear face coverings in public places. It goes into effect Friday at 6 p.m.

CLEVELAND (WJW) -- An international teacher who was caught in China during the COVID-19 crisis thought he was on his way home to Chagrin Falls, only to be detained in Hong Kong and sent into quarantine for two weeks.

This, despite the fact that Kevin Shea passed a COVID-19 test at the Hong Kong airport.

Euclid police officer recovers from coronavirus, has message for others

A closer look: Mask mandate for Ohio counties with high risk of coronavirus

Euclid police officer recovers from coronavirus, has message for others