WOOSTER, Ohio — Wayne County authorities are searching for a man accused of shooting at several officers during a police chase overnight.

None of the officers were injured.

According to the Wayne County Sheriff’s Office, the suspect is James “Bubba” Schmidt.

According to a press release, around 1:30 a.m. Wooster police received information that Schmidt was seen at WalMart, 3883 Burbank Road. They went to the area in an attempt to apprehend Schmidt, who they’d been searching for the past several weeks.

When he saw officers, he reportedly got into a vehicle with a female inside and led officers on a high speed pursuit through Wayne County.

At one point during the pursuit, he fired at officers, striking several police cruisers, according to the release.

The pursuit led to the Orrville area, where Schmidt ran his car off the road and engaged the officers with additional gunfire.

According to the Wayne County Sheriff’s Office, he then is accused of running away, breaking into a home and stealing the keys to an SUV. He then went into an unattached garage and drove the SUV through the structure. 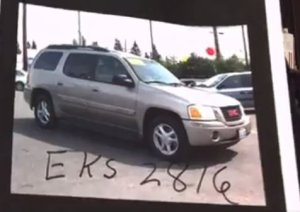 The SUV is described as a 2006 GMC Envoy with license plate EKS 2816. There will be heavy damage to the back of the vehicle.

Schmidt is described as being armed and dangerous.

His last known address is 9541 Back Orrville Road in Orrville. He is 5’5″ tall, weighs around 135 pounds and has brown hair and brown eyes.

He currently has multiple felony warrants for his arrest including:

Anyone with information on his whereabouts is asked to call the Wooster Police Detective Bureau at 330-287-5720.

In a Facebook post, the department says they received a fraud complaint from a 74-year-old Elyria resident and were thankfully able to intercept a package sent containing $200,000 in cash before it was too late.

WASHINGTON (AP) — The government launched a revamped website Monday — the first day of tax filing season — to help people who were eligible for the expanded child tax credit under last year's pandemic relief bill claim the second half of the payment they were due.

The site, ChildTaxCredit.gov, features a new tool that directs taxpayers to filing options, eligibility information and instructions on how to get the credit, according to the Treasury Department. Both virtual and in-person support will be provided in multiple languages.

HUDSON, Ohio (WJW) -- Clark Rumiser has become a fixture at the intersection of North Hayden and Victoria Parkway.

As a Hudson crossing guard he has helped children get to and from school at that intersection for the past 27 years. But his work as a crossing guard goes back five decades.

Crews restoring natural gas to some Akron residents after weekend outages; others could wait for days

Free N95 masks: When, where can Ohioans get theirs?

‘Be patient’: ODOT has warning for drivers with more snow falling