GEAUGA COUNTY, Ohio —  Authorities in Geauga County held a press conference Thursday afternoon after making a break in a cold case murder from 1993.

On March 25, 1993 police found a newborn baby boy dead in the woods.  He had been mauled by animals.

At that time, the child was sent to the Cuyahoga County Coroner’s Office where they confirmed that he had been born alive, but could not determine how he died.

Members of the community came forward and had handmade clothing made for the child’s funeral and burial.  He was referred to as “Geauga’s Child” on his gravestone.  He was memorialized in the Thompson cemetery and, to this day, community members care for his grave, leaving gifts and flowers. 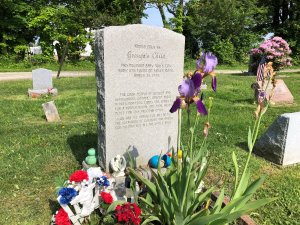 For 26 years authorities had been following up on all leads in the Geauga’s Child case.

In September 2018, the Geauga County Sheriff’s Office identified distant family members of Geauga’s Child.  Detectives compared DNA voluntarily submitted to a database to help identify the mother.  Officials started with a 14,000 person family tree and interviewed potential family members across the country and the  world before narrowing the search down and tracing the DNA to a local woman.

They then issued a search warrant for Gail Eastwood-Ritchey’s DNA, which ultimately confirmed that the 49-year-old Euclid woman was the baby’s mother.

Ritchey allegedly admitted that she had birthed the child, placed him in a trash bag and dumped him.

Authorities say she also admitted to a similar crime that occurred two years prior to the discovery of Geauga’s Child.  Officers have searched the area she allegedly dumped that child and did not find evidence.  They are continuing their investigation.

Ritchey has been charged with one count aggravated murder and one count of murder.

She was arrested Thursday afternoon and taken to the Geauga County Jail. She will be arraigned in Common Pleas Court either Friday or Monday.

Ritchey is currently married to the infant’s father and has three adult children.

Officials say Ritchey shows absolutely no remorse and takes no ownership of the infant. For this reason, he will continue to rest in the Thompson cemetery identified as Geauga’s Child.

In partnership with Northeast Ohio Neighborhood Health Services, Inc., the library will host clinics at the following locations:

POWELL, Ohio (WCMH) -- The elephant calf born six weeks ago at the Columbus Zoo sounds like he has something to say, based on a video posted by the zoo this weekend.

Born June 16, the male calf accompanied his mom Phoebe into their holding area, and in the video, can be heard bellowing.

West Side Market loses power for 2nd time in 2 weeks

CLEVELAND – The West Side Market went dark again Sunday amid a second power outage in as many weeks.

Vendors said the historic market lost power just before noon, and the outage lasted about 1.5 hours.

Man gets shocked through video game controller after lightning strike

Evacuations lifted as progress made against western fires

Fauci: More ‘pain and suffering’ ahead as COVID-19 cases rise

Older Kindles will lose their cellular internet connection by the end of the year. Is yours one of them?

IRS sending out another 1.5 million in ‘surprise’ tax refunds