AKRON,Ohio– Action has been taken after some Akron Fright Fest visitors said they experienced something horrific at the haunted house.

Located on the grounds of the Melanie Lake at Kim Tam Park recreation area in Uniontown, it includes six haunted houses of varying degrees of intensity.

For three of the haunted houses, visitors are asked to sign waivers with the understanding that they can get physical. 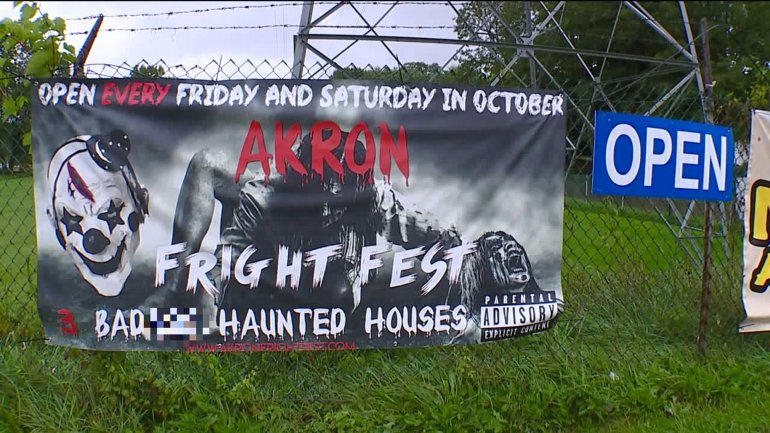 But some visitors are claiming their experience inside one of the haunted houses for which a waiver is not required is more fetish than frightening.

Ryan Carr of Akron says he was visiting Fright Fest with his girlfriend when he was grabbed by an actor who came from under a bed.

“The only thing we saw walking past was a guy jumps out from under the bed and we said, ‘Hey, that’s neat,’ and then as I’m walking by the guy grabs me and throws me on the bed,” said Carr.

“My girlfriend walks over and says, ‘Hey, what are you doing? That’s my boyfriend,’ and he says, ‘Not anymore. He’s mine now; I’m going to rape him,’ and then he started thrusting against me and after like four seconds of that it was really awkward so I just like sat up and said, ‘I’m going to go now,’ and I left,” he added.

The experience is similar to that of a 16-year-old visitor whose mother told FOX 8 she is angry.

“He was with a group of friends going through the three non-waiver houses . He said he was thrown onto a mattress by some guy in a pig mask. The guy was “humping” him, demanded he squeal like a pig and then forcefully took his legs and was trying to pull them apart,” she told FOX 8.

“I work with rape patients from time to time and this is inappropriate. This is not something that belongs in a haunted house,” she added.

Monday evening, a statement from Jeremy Caudill, managing partner of Melanie Lake at Kim Tam Park, said steps are being taken including “employees who worked in the area where the incident allegedly occurred have been suspended while we investigate.”

Caudill said in a statement:

“I was shocked and appalled when I learned about the allegations of a mock rape scene at one of the Akron Fright Fest haunted houses.

We’re still investigating and trying to find out exactly what happened, and we’re hearing some confusing, inconsistent reports. When we know more, we’ll act based on what we learn. But I want to emphasize this point: There is no place for anything like this at our park.”

He said, “Obviously, rape is a horrible act. Even a mock rape scene has no place as part of any entertainment. And it has no place at our park.”

In addition to the suspension of some of the employees, Caudill also announced the following steps:

“We are immediately employing additional security and adding monitoring systems in each of the haunted houses to have a safer environment for our customers and our staffers.

We want to donate portions of our proceeds from the following two weekends to the Rape Crisis Center of Medina and Summit Counties. I will be getting in touch with leaders there to organize that donation.”

Earlier on social media, the owners of the attraction said they are investigating, posting this message:

“The rape scenario is not something we thought up or made up. We are and have been looking into what happened.”

On behalf of the manager, another post on social media said appropriate measures have been taken to resolve the situation.

Those who have complained have become the target of harsh criticism online from people who believe the experience is intended to be extreme, but others, who claim to have been the victim of a sexual assault, have posted, “Nobody that knows what being raped is like would ever be okay with this.”

Carr believes if the scenario is the work of a freelancing “actor” then there should be consequences.

“They are probably someone who is like sick and twisted and they get off by doing that because I cant think of another reason to do that.”