MONETA, Va. — The man who police say killed two journalists during a live broadcast Wednesday was no stranger to WDBJ-TV. He was Bryce Williams, a former reporter for the Roanoke, Virginia, station who was fired two years ago.

Flanagan died in the hospital Wednesday from a self-inflicted gunshot wounds, hours after he fatally shot WDBJ reporter Alison Parker and cameraman Adam Ward. A woman the journalists were interviewing, Vicki Gardner, also was shot and is in stable condition after undergoing surgery. 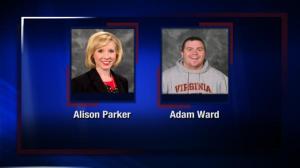 The ex-reporter moved through several television markets in his career, usually leaving after a few years, not always on good terms. Flanagan sued one former employer for racial discrimination, a case that was later settled out of court.

The accusation of racism surfaced again Wednesday when Flanagan’s purported Twitter account — under the name Bryce Williams — tweeted that Parker had made racist comments. Another tweet suggested that Ward complained to human resources officials after the pair worked together.

The shooting devastated Parker and Ward’s colleagues, who covered the story as they mourned, and was shocking for the way it played out.

The shooting was captured live on television during WDBJ’s morning newscast. Later, the Twitter account apparently belonging to Flanagan posted video that showed the shooting from the perspective of the gunman.

The same footage was posted on a Facebook page, also under the name Bryce Williams.

Both social media accounts were suspended within minutes of the hard-to-stomach video being posted.

The video does not show who is holding the recording device. In the footage, you see the camera approach the spot where Parker and Ward were conducting a live shot. The person recording hovers for a few moments just beside where the TV crew is working. The reporter and cameraman don’t appear to pay any attention to the person.

Then a gun comes into the frame, aimed at Parker, and several shots ring out.

“He was a good on-air performer, a pretty good reporter. And then things started getting a little strange,” San Diego 6 News Director Don Shafer said. Shafer had hired and fired Flanagan at a Florida television station.

Following his termination, Flanagan filed a lawsuit in 2000 against WTWC-TV, a Tallahassee station.

Flanagan alleged a producer in an upper-level management position called him a “monkey.” The lawsuit also made other allegations of racism, including that a white worker said “blacks are lazy and do not take advantage of free money,” referring to college scholarships, and that another employee called a murder suspect “‘just another thug.”

The case was settled out of court, according to court documents.

Orlando Salinas, a former WDBJ reporter who worked with Flanagan, told Adweek’s TVSpy that Flanagan often complained about racism in the workplace.

According to Salinas, on Flanagan’s last day at the station, he created a “ruckus” and other employees moved to another room while police escorted him out of the building.

Police said Flanagan wrote a 23-page manifesto that he faxed after Wednesday’s shooting to ABC News.

The document “goes to show where the gentleman’s mind was the night before” the shooting, Franklin County Sheriff Bill Overton told reporters, but he did not disclose what it said.

ABC News confirmed it received the document, reporting Flanagan wrote that his reaction to the racism of the Charleston, South Carolina, church shooting in June led to Wednesday’s events.

“Why did I do it? I put down a deposit for a gun on 6/19/15. The Church shooting in Charleston happened on 6/17/15…,” Flanagan wrote in the manifesto, according to ABC. “What sent me over the top was the church shooting. And my hollow point bullets have the victims’ initials on them.”

Interview: JD Vance talks the state of the Ohio Senate …

Another person was gored by a bison at Yellowstone

Biden headed to Cleveland next week