CLEVELAND — After a nearly hour-long explanation, Judge John O’Donnell Saturday found Officer Michael Brelo not guilty of all counts in the 2012 deadly chase and shooting.

Brelo, who cried as the verdict was read, had been charged with two counts of voluntary manslaughter in the deaths of Malissa Williams and Timothy Russell.

O’Donnell also found Brelo not guilty of felonious assault in the chase and shooting.

CLICK HERE for state and local officials’ reaction to the verdict

Judge John Russo released reasons behind the timing of the verdict. In a statement, he said, “The decision to announce the verdict in this high-profile case on a holiday weekend was not made lightly… The prime consideration was to not delay the reading of the verdict any longer than necessary…It was agreed that by announcing it on a Saturday morning, the potential for downtown traffic issues and the resulting impact on the community could also be lessened.”

Closing arguments in the month-long trial were presented on May 5 and O’Donnell has been deliberating since.

At the start of Saturday’s proceedings, O’Donnell emphasized that no matter what the verdict, the result should be no cause for a “civilized society to riot.”

O’Donnell began by using dummies to point out all fatal and non-fatal wounds to Williams and Russell during the shooting. 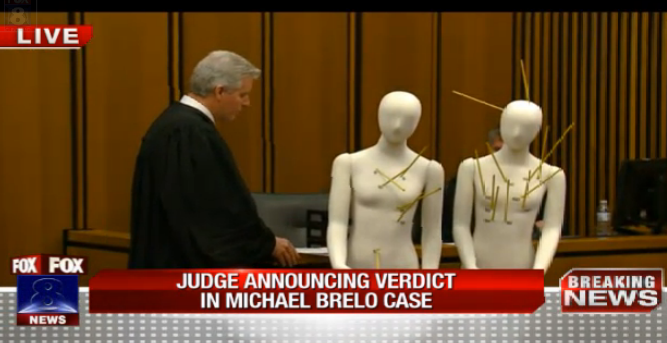 O’Donnell said he could not prove beyond a reasonable doubt that the four fatal wounds that Russell sustained came from Brelo’s gun.

As far as Williams, O’Donnell said no pathologist during the trial could explain at which point during the shooting Williams’ heart stopped beating. He said experts testified that Brelo caused at least one fatal wound to Williams’ chest. He added, however, that other officers inflicted additional wounds that would have been fatal.

O’Donnell said that prior to the shooting, Brelo was seeing a car moving at officers, with suspects still moving inside when he opened fire.

O’Donnell pointed out that when Brelo fired, his “use of deadly force was a constitutionally reasonable response.” Brelo did “run afoul,” he said, when he got onto the hood of a cruiser and shot into the car holding Williams and Russell.

That behavior is not part of training and is not safe, he said.

Following the verdict, there were protests throughout Cleveland.

A LOOK AT THE CASE:

On Nov. 29, 2012, Cleveland Police Officer Vasile Nan thought he heard a gunshot while he was outside of his cruiser on St. Clair Avenue near the Cuyahoga County Justice Center, and pursued a blue car. The resulting police chase lasted 22 minutes, and involved more than 60 police cars and more than a hundred officers. It stretched through downtown Cleveland, into the Tremont neighborhood and at high speeds on Interstate 90 before ending at Heritage Middle School in East Cleveland.

In the school parking lot, 13 Cleveland officers fired a total of 137 shots at Russell’s 1979 Chevrolet Malibu. Investigators from the Ohio Bureau of Criminal Investigation said 49 of those shots came from Officer Brelo’s Glock 17. His final 15 shots were fired from the hood of the suspect’s car.

According to the Cuyahoga County Medical Examiner’s Office, Russell suffered 23 gunshot wounds and his passenger, Williams, was shot 24 times.

A team of Cuyahoga County prosecutors called 45 witnesses, including 20 police officers, multiple BCI agents and a number of experts. They presented shell casings, foot prints and hundreds of photos as evidence.

“Timothy Russell made some bad decisions that night, but it should not have been a death sentence for him,” assistant prosecutor Sherrie Royster said.

Prosecutors tried to paint Williams as a kidnapping victim, who was unable to escape Russell’s car because of a C-clamp holding the passenger’s side door shut. They presented witnesses who testified Williams was holding a pop can, not a weapon; and argued she was waving her hands to surrender, not pointing a gun at officers. BCI agents did not find a gun in the car and multiple agencies searched the chase route, but did not find a firearm.

Russell and Williams lived on the fringes of society and battled personal demons, but they were not notorious criminals, according to prosecutors. Russell had alcohol in his system and Williams consumed marijuana shortly before her death. Toxicologists said both tested positive for cocaine.

Prosecutors took aim at Brelo’s tactical decisions in the Heritage Middle School parking lot. They said his call to jump onto the trunk of Cleveland police car 238 and the hood of Russell’s Malibu was “unreasonable,” “unheard of” and showed his intent to kill.

“He fires his last 15 shots into their bodies, essentially using them for target practice,” Royster said. “He knew they were trapped. He knew they were not shooting so he stood right up in front of them, exposing his body, and shot them.”

But Brelo’s defense team, including former Cleveland police union attorney Patrick D’Angelo, argued their client had probable cause use deadly force against the two chase suspects.

According to defense experts, Officer Brelo was justified until the last 2.6 seconds. That’s when he jumped onto the car. By that time, Williams and Russell were already dead, a forensic pathologist for the defense testified.

The tension of the chase put the police on edge and the occupants of the Malibu did nothing to ease those fears, defense attorneys argued. D’Angelo said Brelo and other officers believed they were going to die that night.

“These officers have family, they’re married, they have children,” D’Angelo said. “They work these mean streets, they know what it’s like to deal with heartless felons… These men and women responded because of their call of duty.” He said Brelo and most of the 12 other officers who discharged their weapons were shaken and emotional after the shooting.

Five other Cleveland officers are charged with dereliction of duty in the case. Those officers were called to the stand during the Brelo trial, but all took the Fifth Amendment and refused to testify.