ELYRIA, Ohio– The occupants of a car were injured during a police-involved shooting in Lorain County on Tuesday.

It started when Elyria officers were called to an apartment on Park Meadow Lane just after 4 p.m. for shots fired at the building from a car, the Lorain County Sheriff’s Office said.

Elyria police spotted a vehicle matching the description at the Marathon gas station on East Avenue in Carlisle Township. 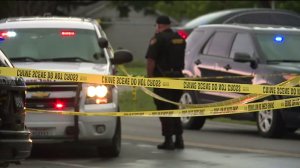 Video of the shooting was posted live to Facebook.

People inside the car were injured, but their conditions are not known at this time. They were taken to UH Elyria Medical Center and Mercy Health Lorain Hospital. Their names have not been released.

No officers were hurt.

The Elyria Police Department is handling the initial shooting at the apartment building. The department requested the Lorain County Sheriff’s Office and Lorain Police Department conduct the investigation into the officer-involved shooting.

SHAKER HEIGHTS, Ohio (WJW) -- The Unitarian Universalist Congregation of Cleveland in Shaker Heights is hosting a candlelight vigil for peace in honor of George Floyd.

Floyd, 46, died after a Minneapolis police officer dug his knee into the back of his neck while he was on the ground in handcuffs. Floyd can be heard on recorded cellphone video saying he can't breathe and begging for help.

Will insurance cover the riot damage in Cleveland?

CLEVELAND, Ohio (WJW) – Many downtown business, still reeling from being closed for about two months, now face a second blow: they are closed again because of damage caused by Saturday’s looting and rioting.

But are they insured?

MINNEAPOLIS (AP) — President Donald Trump threatened on Monday to deploy the United States military unless states quickly halted the violent protests that have convulsed cities from coast to coast, hours after George Floyd’s brother pleaded for peace, saying destruction is “not going to bring my brother back at all.”

The competing messages — one conciliatory, one bellicose — came as the U.S. braced for another round of violence at a time when the country is already buckling because of the coronavirus outbreak and the Depression-level unemployment it has caused.

Will insurance cover the riot damage in Cleveland?

FBI asks for help identifying those who incited violence during protests in Cleveland, around the country