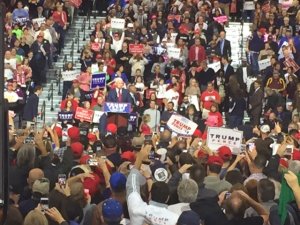 Huge crowds at a Cleveland arena and an outdoor rally in Virginia Beach greeted Donald Trump as he visited the battleground states of Ohio and Virginia.

Trump's claim that the system is "rigged" was a prominent feature of all his speeches on Saturday.

Speaking in the evening at the I-X Center in Cleveland, the Republican presidential nominee alleged that the election could be influenced by widespread voter fraud.

Election officials and academics who study elections insist he is wrong.

Trump is painting the election as a choice between change and more of the same under rival Hillary Clinton.

Trump found another receptive audience for his promise to "drain the swamp" in Washington when he visited Regent University in Virginia Beach earlier in the day. He began the day in another battleground, Pennsylvania, with a speech at Gettysburg.

(AP) - Hyundai and Kia will spend $137 million on fines and safety improvements because they moved too slowly to recall over 1 million U.S. vehicles with engines that can fail.

Editor's Note: The video above is of shoppers at SouthPark Mall Friday.

(NEXSTAR) - If you're like most online shoppers, you love peeking through the slash mark to see what the price used to be on the item you are about to buy. It feels great to tell yourself you saved a pile of money, but not every Black Friday deal is the best price ever offered for a product.

Republican Secretary of State Frank LaRose said the state produced an extraordinary level of access for voters, setting records with nearly 6 million votes cast and a 74% turnout that tops the average of the past 20 years.

Wanted: Amherst police look for person who sprayed drive-thru worker in the face

Black Friday amid pandemic: Will shoppers turn out to help struggling stores?

Have Thanksgiving leftovers? USDA offers tips on how to safely store them for later

Coronavirus in Ohio: ‘We will not avoid some catastrophe here,’ Dr. Acton warns

Wanted: Amherst police look for person who sprayed drive-thru worker in the face