PARMA, Ohio-– Vicki Barrett’s house is getting a lot of attention right now. Some people don’t like the Halloween decorations she has in her front yard.

“This is the third year that we’ve done it, but for some reason this year we’re getting a lot of media over it,” said Barrett.

The display includes dummies covered in blood, wrapped in bags and hanging from trees.

Michael Pasek said it’s way too much and worries it’ll scare the kids at the Dentzler Elementary School down the street.

“I just think that belongs in a haunted house somewhere rather than perhaps out on the street,” he said.

He said if they don’t take it down, they should at least try to tone it down.

Barrett said that’s not happening. She said her children haven’t had any problems with the display. 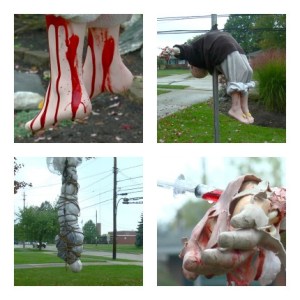 “When we put up the display, I don’t think we even considered that there was a school there,” she said. “I think as parents, if my kids were going to that school or if I was someone in the neighborhood, I would just teach my children that this is a Halloween display and I thought other parents would have done the same.”

“I think it’s fine. It’s Halloween. I don’t see a problem with it. My daughter has watched ‘Nightmare on Elm Street’ and she’s seven. So she’s not scared and I think it’s all in good fun,” said Austin.

FOX 8 reached out to city officials in Parma and were told Barrett is not breaking any laws and has a right to freedom of expression.

“So we’re going to basically go with our freedom of expression and keep everything up and enjoy Halloween,” said Barrett.

Rubber hex dumbbell sets are important pieces of workout equipment because they allow you to perform multiple, different styles of lifting and training.

​​One of Pilates’ most attractive features is that it doesn’t require bulky machines like those used in weight-lifting or cardio.

Can a drugstore be your only doctor?

Who’s making the Super Bowl? What the odds say

How to tell if your gas stove is hurting your health

Wooden board impales windshield on I-90