NEW YORK — A viral forecast predicting that Hurricane Irma will smash into an already ravaged Texas is fake.

The fake graphic made the rounds on social media at the end of August. It has been shared thousands of times.

Someone named Joe Maley posted the graphic on a Facebook page. The graphic had the National Oceanic and Atmospheric Administration logo on it.

The fake image shows Irma heading into Texas, where Harvey, the hurricane-turned-storm, has left record rainfall, devastation and killed dozens. But, according to Fox 8’s AJ Colby, the storm is NOT heading into the Gulf of Mexico. In fact, all indications show that it will be pushed into the Atlantic next weekend. 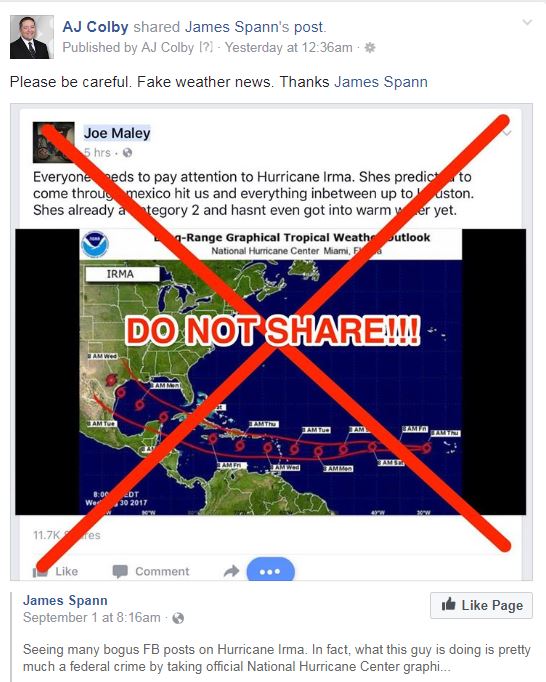 AJ warns that people should be getting weather warnings from known, reliable meteorologists. The Fox 8 Weather page and Facebook page always have the latest, accurate information on big weather stories. The National Hurricane Center out of Miami is also reliable when it comes to hurricanes.

AJ also says that when Maley used the NOAA logo on his graphic, he may have broken the law.

BEREA, Ohio (WJW) - Drive up to drop off donations or pick up food.

“Our purpose is simply to get the food into anyone’s hands who wants it,” Berea Safety Director Barbara Jones said. “No pre-qualifications, no questions, no bureaucracy.”

CLEVELAND, Ohio (WJW) - The American Red Cross needs your help to get the nation's blood supply to a stable level.

They're holding a blood drive with the Cleveland Clinic and the Rocket Mortgage FieldHouse Tuesday.

(CNN) -- Some jobless Americans will start seeing heftier unemployment checks as soon as this week, depending on where they live.

States are beginning to implement the historic enhancement of unemployment benefits that Congress included in its $2.2 trillion relief packageto address the coronavirus pandemic savaging the economy. It includes a $600 weekly increase for up to four months, on top of state benefits.

Dream job alert! Company wants to pay you to watch Disney+ while you ‘stay at home’