If you’ve ever been to a funeral, you’ve probably had them. Those cheesy, creamy potatoes served in a casserole dish with a crunchy coating on top.

In parts of the West and Midwest, they are known as “funeral potatoes” — since they are commonly served after gatherings following a funeral.  But, they are also served at church gatherings, holidays, graduation parties, and other occasions. They are said to have started in Utah.

Back in 2016, Augason Farms introduced a prepackaged kit with all the ingredients. But some recent ads for them on Facebook have people taking to social media to express their surprise at the name of the dish.

“Someone explain this to me, did I miss something,” Nikki Brewer posted on Facebook.

“Has anyone had funeral potatoes before? Just had this advertisement come up on my FB feed,” Anna Durling asked on Facebook.

Dustin Griffin tweeted about them using the hashtag “starch of death.” 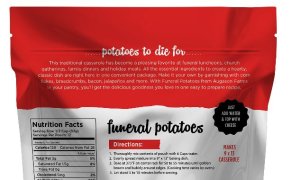 Rob Eads pointed out the marketing copy on the back of the bag that says “Potatoes to die for.”

Wait… Funeral Potatoes? Is this really a thing you can buy at the grocery store?

I'm equally intrigued by the marketing copy on the back of the bag: "potatoes to die for"

I mean, why not call them Pot Luck Potatoes? or Church Buffet Potatoes? But Funeral Potatoes? Really?

That moment when you're bee-bopping along on FB, and you come across Funeral Potatoes. What exactly are Funeral Potatoes? Is that a thing? I mean, I guess it is, cause Walmart's selling them. Am I crazy or is this weird? pic.twitter.com/g01h0KB4NA

I make them on Good Friday as Funeral Potatoes and serve them on Easter as Resurrection Potatoes.