CLEVELAND –  Both of them are NBA superstars. But one of them is an Indians fan and the other is….ok….a Cubs fan.

So  Lebron James of the Cleveland Cavaliers and Dwyane Wade of the Chicago Bulls have decided to place a little wager on the outcome of the 2016 World Series. It took a few days, but they’ve finally decided what the bet will be:

Wade put it this way to LeBron over Twitter: “We’re both fashionable guys, we both love to dress, we both love to feel good and look good. So the loser has to show up during the NBA season to the other guy’s home game dressed as the team who won.”

Which  means that in January, when the Bulls come to play in Cleveland, Wade will b 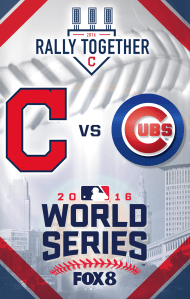 e dressed in full Cleveland Indians’ uniform gear: from the cap all the way down to the shoes.

Let’s not even entertain what LeBron might have to do in December when the Cavs go to Chicago.

Fox 8 is your official Cleveland Indians station – you can only see the games on Fox 8 and we will bring you extensive coverage from on the field and behind the scenes!

You can now buy Tupperware at Target