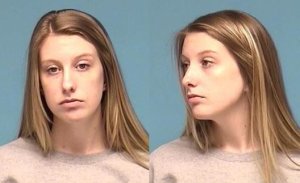 LORAIN COUNTY, Ohio — A 24-year-old teacher has been arrested for having an alleged sexual relationship with one of her students.

According to a release from the Lorain County Sheriff’s Office, Sarah Conway, 24, turned herself in on Thursday. She faces four counts of sexual battery.

According to authorities, Conway, who is a teacher at Willow Creek Positive Education Program in Eaton Township, filed a harassment complaint against an 18-year-old male student on March 21.

During the process of filing the complaint, Conway shared that she’d entered a sexual relationship with the student.

Authorities reviewed text messages and conducted interviews, learning she had a relationship with the student, who was 17 at the time.

That’s when charges were filed.

The complaint against the male was investigated, but at this time, no charges are expected.

The investigation is ongoing.

“On March 21, allegations of an inappropriate relationship between a staff member and student at Positive Education Program (PEP) Willow Creek located in Grafton were surfaced to PEP administrators. Upon learning this information, PEP immediately reported the incident to law enforcement and the staff member was placed on administrative leave. This sort of alleged conduct directly contradicts with PEP’s mission to help troubled and troubling children learn and grow and will not be tolerated. In accordance with policy and legal standards, PEP has awaited the outcome of the police investigation, which just became known today (April 26). The process is underway to terminate this individual’s employment with Positive Education Program.”

**Editor’s note: This story was updated on April 27 with a statement from PEP**

Guardians beat Yankees, edging them out 2-0

Guardians beat Yankees, edging them out 2-0

Protesters set fire to a dumpster in downtown Akron

What we know in wake of officials releasing Jayland …

Akron city trucks parked near areas of protests for …

Ohio’s new fireworks law: What are the rules?