CLEVELAND- Two suspects responsible for killing a local college professor and a teen boy were sentenced on Wednesday. 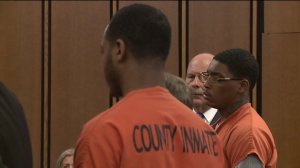 In March, Kassius Williams and Charles Walker, were in a vehicle traveling west on Woodland Avenue near East 89th Street when they opened fire on a Saturn with four males inside.

Two people were killed in the gunfire. Tywan Johnson, a 15-year-old male passenger in the Saturn, died of a gunshot wound to the head; a second victim, 61-year-old David Wilder, was struck by a stray bullet as he traveled west on Woodland.

Tywan’s mother, Tiffany Johnson, spoke about her son during court proceedings on Wednesday. She said the teen frequently volunteered at nonprofits and would give his friends the shirt off his back.

Wilder served as an adjunct professor at Tri-C, Cleveland State and John Carroll University. His family did not attend the hearing, but his nephew wrote a letter, which described Wilder’s devotion to improving the community. The letter sent prayers to the Johnson family and concluded with this message to the suspects:

“You did not take into the account the ripple effect of hundreds who are permanently affected by your senseless and reckless decisions. As you contemplate and reflect on your actions in the years to come, I will leave you with this: Two innocent people did not get the opportunity to live out the rest of their lives as they were intended. If David were standing here today to address you, he would express to you that you have an obligation to do something good with your lives, to use your own hardship to make a difference in someone else’s life so that events such as this might be prevented from happening again in the city he loved.

Texas man wrestled and gripped infant’s head ‘in a football hold’ prior to his death, affidavit says

EL PASO, Tex. (KTSM) — Marvin Rex Lake gripped a 1-year-old infant like a football, wrestled with the baby and dropped him on the frame of a futon, causing fatal injuries, according to a police affidavit.

Lake, 24, was arrested on Monday in connection to the death of Ahren DeHart, a 1-year-old child who the El Paso County Medical Examiner’s Office says died of intentional trauma/homicide.

COLUMBUS, Ohio (WJW) – Protesters took to the street to demonstrate against another deadly shooting in which an officer pulled the trigger in Columbus.

Around the same time a verdict in the Derek Chauvin trial was read Tuesday, a Columbus police officer shot and killed a teenage girl who swung at two people with a knife.

Editor's Note: The video above is a gun safety conference.

Texas man wrestled and gripped infant’s head ‘in a football hold’ prior to his death, affidavit says

Kristin Smart’s body was once buried in yard of home owned by suspect’s dad: Court docs

Blog: Record-breaking snowfall? Maybe for some this late in the spring