CHARLESTON, S.C.— Dylann Storm Roof, 21, is in custody in North Carolina. The Charleston church shooting suspect was armed with a gun when he was arrested in Shelby, North Carolina, according to a law enforcement official briefed on the investigation. It’s not clear if it’s the same firearm he allegedly used in the shooting. Earlier, CNN reported that investigators believe he used a handgun in the shooting.

Roof’s father recently bought him a .45-caliber gun for his 21st birthday, a senior law enforcement source briefed on the investigation told CNN.

Police in Shelby, North Carolina, arrested the Charleston church shooting suspect after a citizen called police about a vehicle he or she thought was suspicious, Charleston police Chief Greg Mullen said Thursday. “He was cooperative with the officer who stopped him,” he said. Mullen declined to say whether Roof has said anything to police.

“I am so pleased that we were able to resolve this case quickly … so that nobody else is harmed by this individual” suspected of killing nine people, Mullen added.

With Vice President Joe Biden standing alongside him, President Barack Obama commented Thursday on the church shooting, calling their deaths “senseless murders.” “Any death of this sort is a tragedy. Any shooting involving multiple victims is a tragedy,” he said. “There is something particularly heartbreaking about death happening in a place in which we seek solace, we seek peace.”

Roof is the suspect in Wednesday’s deadly shooting at the Emanuel AME Church. The shooting victims at Charleston’s Emanuel AME Church “were killed because they were black,” Charleston police spokesman Charles Francis told CNN’s Nick Valencia on Thursday. Francis said this after Valencia asked them what is leading authorities to investigate the shooting as a hate crime. Roof told the victims, “You rape our women and you’re taking over our country. And you have to go,” said Sylvia Johnson, a cousin of the church’s slain pastor. She cited survivors of the shooting and was quoted by CNN affiliate WIS. 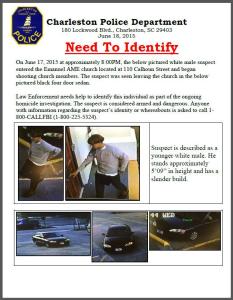 Nine people were killed — six females and three males, Mullen said. Three people survived, including a woman who received a chilling message from the shooter.

“Her life was spared, and (she was) told, I’m not going to kill you, I’m going to spare you, so you can tell them what happened,” Charleston NAACP President Dot Scott told CNN. Scott said she heard this from the victims’ family members.

Federal authorities have opened a hate crime investigation into the shooting at the Emanuel African Methodist Episcopal Church, the oldest AME church in the South, the Department of Justice said.

“The only reason someone would walk into a church and shoot people that were praying is hate,” Charleston Mayor Joe Riley said.

Eight churchgoers died at the scene; a ninth at a hospital, police said.

Pinckney was also a state senator and one of the black community’s spokesmen after the slaying of an unarmed man by a North Charleston police officer earlier this year.

There were 13 people inside the church when the shooting happened — the shooter, the nine people who were killed and three survivors, South Carolina state Sen. Larry Grooms, who was briefed by law enforcement, told CNN. Two of the survivors were not harmed, he said.

The shooter spent about an hour inside the church attending a regular Wednesday night prayer meeting before he started shooting. It was not clear if the man targeted any individual.

“We don’t know if anybody was targeted other than the church itself,” he said.

Authorities said they were shocked not only by the killings but that the violence occurred in a house of worship.

“People in prayer Wednesday evening. A ritual, a coming together, praying, worshiping God. An awful person to come in and shoot them is inexplicable,” Riley said.

It was burned to the ground at one point, but rebuilt. Throughout its history, it overcame obstacle after obstacle — destroyed by an earthquake, banned by the state. But its church members persevered, making it the largest African-American church in terms of seating space in Charleston today.

A call for healing

The killing put the nation’s spotlight once again on the Charleston region. Several months ago, Walter Scott, an unarmed black man, was fatally shot in the back by a North Charleston police officer, a killing that was captured on video.

Pinckney backed a bill to make body cameras mandatory for all police officers in South Carolina.

“Body cameras help to record what happens. It may not be the golden ticket, the golden egg, the end-all-fix-all, but it helps to paint a picture of what happens during a police stop,” Pinckney said in April.

Mayor Riley, who’s seen Charleston go through ups and downs during his 40 years as mayor, said the city must immediately start the healing process.

“We can catch this no-good, horrible person and see that he pays the price,” he said. “And then what we will do, and what this community has always done, is we are going to put our arms around that church and that church family.”

After the shooting, church and community members converged on the area to pray in the street, often while holding hands.

Dot Scott, the NAACP leader, said family and friends of the victims gathered at the Embassy Suites motel near the church after the shooting. The city set up a victims’ assistance center there.

“There were at least 50 or more people there,” she said. “There were families of the victims, grandchildren, council members, and a bunch of people there.”

Scott said that’s where she heard about the shooter sparing the woman in the church.

“I did not hear this verbatim from the almost victim, I heard it from at least half a dozen other folks that were there and family of the victims,” she said. “There seems to be no question that this is what the shooter said.”

‘Sick to our stomachs’

The church sits in an area of Charleston densely packed with houses of worship and well-preserved old buildings. The streets of the neighborhood are normally filled with tourists.

Charleston, as several church leaders pointed out, is known as the “Holy City” because of its numerous churches and tolerant attitude toward different denominations.

“Like everybody out here, we’re sick to our stomachs that this could happen in a church,” said Rep. Dave Mack, a friend of the church’s pastor.

They called for justice, but also for calm. Theirs is a strong community, they said, and this incident wouldn’t tear them apart.

The president of the NAACP expressed his outrage over the shooting.

“There is no greater coward than a criminal who enters a house of God and slaughters innocent people engaged in the study of scripture,” Cornell William Brooks said.

“As the #Charleston police deem this horrific act a hate crime,” the King Center tweeted, “we pray vigorously that this person’s hate does not cultivate more hate.”

VERMILION, Ohio (WJW) – A months-long investigation into bomb threats at schools Vermilion and Brunswick has led to charges for two teens.

According to investigators, the threat made to Sailorway Middle School in Vermilion on February 1 was connected to an IP address in Columbia, Tennessee.

LONDON (AP) — Queen Elizabeth II has returned to royal duties, four days after the death of her husband, Prince Philip.

The 94-year-old British monarch attended a retirement ceremony for a senior royal official on Tuesday, according to the Court Circular, the official record of royal engagements.

Guests can visit tiger cubs at the zoo, something that hasn’t happened in more than 20 years.

Two stabbed at The Clevelander Bar and Grill

Police: Woman breaks into home, climbs into bed with couple

Lakewood police: Teen in surgery after being shot in chest at Madison Park

Your grocery bill will likely be more expensive this month

Lawmakers push bill that would allow Texans to carry handguns without permit, training

Fireball captured exploding in sky was a meteor, NWS confirms