AKRON, Ohio- A Summit Metro Parks ranger is on paid leave, accused of following a pair of senior citizens back to their home, and roughly arresting them, after they honked their horn at him.

On Newton Street in Akron, veteran and longtime Akron resident, Carl Wilson, was driving with his wife, Margaret, when they came up behind a Summit Metro Parks ranger.

“I tooted the horn and went around; he swung out behind me and followed me up,” Carl Wilson told FOX 8.

The ranger followed them to their house and around the corner.  “So I come up here and pulled in the driveway and that’s when he pulled in behind me.”

Carl Wilson says the ranger got out and did something Carl was never expecting. “He was screaming, said, ‘get out of the truck,’ and ‘get on the ground.’ I said, ‘what`s wrong with you?’ I said, ‘I’m no criminal; why did you follow me?'”

Wilson says the ranger pulled him from his truck and threw him on the ground.

“He was absolutely crazy, like he was on drugs and he wouldn’t answer any questions.”

Margaret says she was scared because after her husband’s heart surgery, he has to wear a protective vest. “I just thought he was going to hurt him because, you know, he has no protection here,” she said. 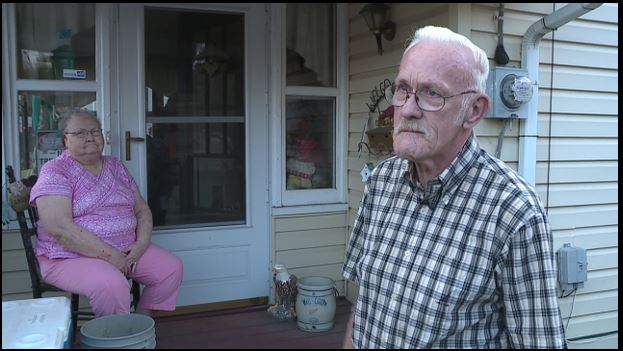 Carl says the ranger then turned to Margaret.  “We were standing here at the door of the truck and he ran all the way back and took his foot and kicked her, messed up her elbow, messed up her back.”

The couple is very shaken up and can’t believe this happened to them in their own yard.

“I wasn’t even in the park. The guy, he shouldn’t even be a dogcatcher, let alone in the park as a ranger.”

Summit Metro Parks has placed a park ranger on paid administrative leave following an incident yesterday involving a senior couple in their vehicle. We have also requested that all charges brought against the couple after the incident be dropped immediately.

The incident began yesterday morning at the Newton Street entrance of Goodyear Heights Metro Park. The ranger pursued the couple’s vehicle to a residence on Darrow Road and handcuffed both individuals after an altercation. A backup ranger was summoned to the scene, and an Akron Police officer driving past the residence also stopped to offer assistance. The couple was charged with resisting arrest, obstruction of official business, aggravated menacing and failure to comply.

We are conducting an internal investigation of the incident and have also reached out to the couple to learn more about the matter from their perspective. We are asking the Akron Police Department to conduct a third-party review as well. We will cooperate fully with APD’s review.

We take this matter very seriously. Our rangers are commissioned peace officers who enforce the park district’s rules, regulations and other applicable laws to protect resources, keep visitors safe and maintain good order. We hold our rangers, and all of our employees, to a high standard of conduct. Even though this incident unfolded outside park boundaries, we expect them to live up to that standard. The public deserves no less.

As soon as we learned of this incident, we immediately placed the ranger on paid administrative leave and began our investigation, in keeping with Summit Metro Parks policies and procedures, and in keeping with our contract with the Ohio Patrolmen’s Benevolent Association (OPBA).

We will provide updated information as new developments occur.

The Wilsons say they are in shock, and are hiring an attorney.  “I don’t wish anything bad on him, but I think they should prosecute him so that he don’t act like that anymore and hurt someone else.”