CLEVELAND  — Le’Veon Bell scored on a 1-yard touchdown run — long after time expired in the first half — and the Pittsburgh Steelers recorded eight sacks and snapped a four-game losing streak with a 24-9 win Sunday over the winless Cleveland Browns.

The Steelers (5-5) scored eight points with zeroes showing on the clock before halftime after they were awarded two extra plays because of defensive penalties against the Browns (0-11).

Steelers defensive tackle Javon Hargrave recovered a fumble by QB Josh McCown for a TD with 3:36 left to seal Pittsburgh’s win. The Steelers came in with a league-low 13 sacks before unloading on the Browns.

Bell finished with a season-high 146 yards rushing as the Steelers improved to 2-3 on the road and avoided an embarrassing loss to the NFL’s worst team.

Ben Roethlisberger improved to 20-2 in starts against Cleveland, still paying for not drafting the Ohio native in 2004.

Making it worse, Roethlisberger’s 10 wins in Cleveland match Derek Anderson for the most home wins by a Browns quarterback since 1999.

Cody Kessler sustained a concussion — his second this season — late in the third quarter. Kessler was being dragged down when he was hit by Steelers linebacker Lawrence Timmons, who launched himself and was called for unnecessary roughness. 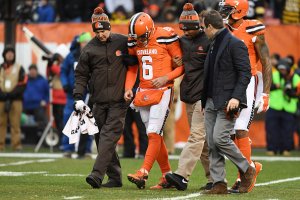 Cleveland had 33 yards rushing in losing its 14th straight going back to last season. McCown replaced Kessler and threw a 14-yard TD pass to Gary Barnidge in the fourth quarter.

On a blustery day, the Steelers turned to their running game and a defense that hasn’t been up to Pittsburgh’s standards. Stephon Tuitt had 2½ sacks and the Steelers spent much of the afternoon delivering hard hits.

Pittsburgh dominated the first half, but only led 6-0 before the strange final moments.

Starting at the Cleveland 41, Roethlisberger drove the Steelers to the Browns 3 with 8 seconds left. On second down, Roethlisberger’s pass to Antonio Brown in the end zone was incomplete as time ran out.

However, Browns defensive back Briean Boddy-Calhoun was called for holding, giving Pittsburgh another chance.

Again, Roethlisberger looked for Brown, who was dragged to the ground by star cornerback Joe Haden. Pass interference was called and the Steelers took advantage of a second untimed play as Bell bowled over the goal line to make it 12-0.

The Steelers, who went 0-for-4 on 2-point conversions a week ago in a loss to Dallas, connected this time as Roethlisberger threw to tight end David Johnson.

The miscues were a microcosm of Cleveland’s miserable season. The Browns are young, and unfortunately they’re taking their lumps during a massive rebuild.

Harrison drilled Kessler in the third quarter to pass Jason Gildon (77) for the most sacks in the Steelers’ storied defensive history. It’s likely Hall of Famers Joe Greene, Jack Lambert or Jack Ham could have more, but the NFL didn’t recognize sacks as an official statistic until 1982.

Browns quarterback Robert Griffin III, who has been out since breaking a bone in his left shoulder in the season opener, did some conditioning drills, threw — and even drop kicked a ball through the uprights — before the game.

Griffin has been cleared to practice this week and will undergo another medical exam to see if he can take contact.

If he continues to progress, Griffin will likely start one of Cleveland’s final five games. The Browns have a bye on Dec. 4, which would give RG3 additional time to get ready.

Many of those in NE Ohio woke up Wednesday morning to a few inches of snow.

CLEVELAND, Ohio (WJW) - Many areas overnight saw up to 4 inches of snow in Northeast Ohio.