Gavin Lowe, 17, was seriously injured in a crash while he and a 14-year-old passenger were driving home after football practice last month.

Lowe, a Crestview High School student, suffered a broken back, broken pelvis, broken ribs and a fractured eye socket. Lowe, who is a senior wide receiver on the team, will not be able to play this year.

Friday night, a team from MetroHealth Medical Center’s Lifeflight landed on the 50-yard line of the football stadium to deliver Lowe the game ball.

"I like being out here with my guys and helping my team as much as I can. That's what really helps me and keeps me going, like coach keeps me involved and that's how I can push through and have those good days, knowing that I'm still on the team," said Lowe. "Some nights are better. Some nights are worse. Some nights, you know, I just cry over and over again, not knowing...knowing I can't play," he told us on Friday.

His mother, April, said she believes the quick action by one of her son’s teammates helped save his life.

“His teammate, Austin Barcroft, saw the scene and ran to help Gavin,” April Lowe said. “His father said he never saw him move so fast. He was right there, made sure he was in a position so he could breathe and that is a huge reason he is doing so well now.”

The Ohio State Highway Patrol said Lowe lost control, went off the side of the road into a ditch, hit a telephone pole and rolled over in a soybean field. 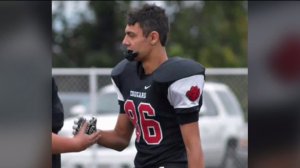 Investigators said the passenger was wearing his seat belt, and suffered minor injuries.

Lowe’s mother said her son was wearing his seat belt too, but he didn’t have it on correctly. She said he put the shoulder strap behind him.

She said that’s something he won’t do again.

CHAMPAIGN COUNTY, Ohio (WCMH) – Two Champaign County residents have been charged in connection to the Capitol incursion earlier in January.

According to the U.S. Department of Justice, Donovan Ray Crowl and Jessica Watkins have been arrested by the DOJ’s Southern District of Ohio.

TOLEDO, Ohio (WJW) – A young officer was shot and killed Monday in Toledo when a barricaded gunman ran out of a home with guns firing in multiple directions.

Officer Brandon Stalker was shot in the head.