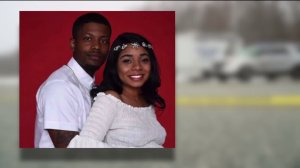 MANSFIELD, Ohio — Authorities have released the frantic 911 call made after a woman was abducted at gunpoint on the Ohio State University campus in Mansfield.

Around 11:45 a.m. Monday, authorities say Skylar Williams, 20, was abducted from a parking lot. Authorities say she was kidnapped by Ty’Rell Pounds, 24, the father of her child. Investigators say he forced her into a rental car he was driving.

A female is heard on the 911 call telling dispatchers:

“Someone just kidnapped a girl on campus with a gun…they’re already gone. They put her in a car and pulled a gun.”

The female told dispatchers she didn’t witness the kidnapping, but she was with a male who did. She told the dispatcher the girl was taken in a red Dodge Challenger with a Florida license plate.

According to police, the rental car was returned to Enterprise, where Pounds’ personal vehicle was located. The two then got into that car.

Investigators say they are aware of a Facebook posting where Pounds says goodbye to his son and apologizes for leaving him to grow up without parents.

They say the couple’s son is safe and in the care of relatives.

HUDSON, Ohio (WJW) - Lou Smith has been putting flags outside his Hudson home for more than 30 years. He started with just fifty flags and has added more every year. Smith served in the US Army. His five brothers have also served. Smith’s son is a captain in the US Air Force. Smith told FOX 8 he wishes every home had a flag and he says it breaks his…

CLEVELAND, Ohio (WJW) – The WWII submarine USS Cod is honoring servicemen and women Monday with a ceremony. “A virus will not stop Americans from honoring those who made the ultimate sacrifice for our freedom!” is the motto for the program, according to a press release. According to Cod Director Paul Farace, the Cod has never held its own Memorial Day program but instead served as a backdrop for veterans…

MENTOR, Ohio (WJW) – While many communities canceled Memorial Day ceremonies to prevent large gatherings, the city of Mentor decided to move forward with theirs with a few changes. The Memorial Day observance will be a parade of cars only. Motorcycles, buses, bicycles, and pedestrians were not allowed. The parade route started at Memorial Middle School and wind through the Mentor Municipal Cemetery. Everyone is asked to stay in their…