CANAL FULTON, Ohio – The rain-swollen Tuscarawas River continues to churn through Stark County, spilling over its banks into neighborhoods and basements, isolating about 58 homes in one neighborhood which can only be accessed by boat.

Water from rains earlier in the week continues to flow downstream, bringing the river to over 14 feet, the fourth highest level in recorded history.

Stark County Emergency Management Director Tim Warstler says no one under the age of 40 has ever seen the river this high, and among the highest levels recorded since a record flood in 1913.

The swollen river created somewhat of a spectacle in Canal Fulton on Wednesday.

People were stopping to take photographs of Heritage Park under water.

The water was spilling into the basements of adjacent businesses and making it impossible for visitors to get to the park’s visitor center.

For homeowners, in threatened areas, the concerns are far from over. 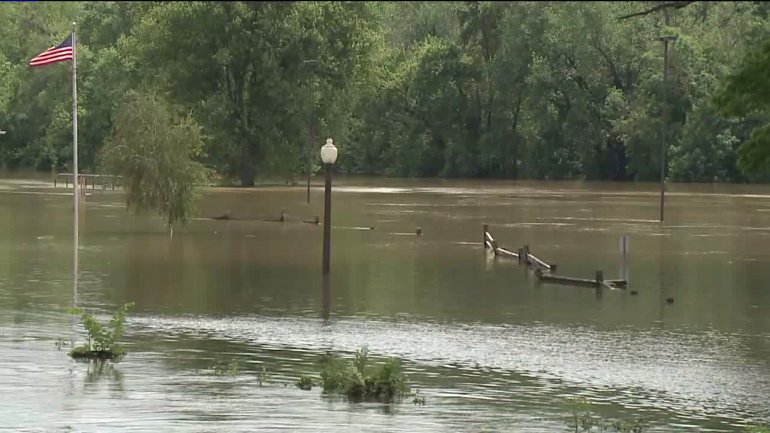 “A lot of people know to prepare to get things, to move things in their homes or to seal up openings in their homes, things like that; there’s a lot of places, if they live along the river, they are very in tune with this and a lot of them are very well prepared,” said Warstler.

Warstler is closely working with the National Weather Service, which is also monitoring not only the current conditions, but what is expected to come next.

“It’s been a very, very active period. We have really not gone more than a few days with quiet weather and this is basically the accumulation of event after event after event until you reach a point which we have reached right now where there’s basically no more room for the water to go and we end up with this kind of a flooding situation,” said Sarah Jamison of the National Weather Service Cleveland office.

“The ground right now is saturated. We really cannot afford to absorb any more rainfall, any additional rain that we are expecting, as we are we have a flash flood watch up for tonight into tomorrow is going to lead to very rapid flash flooding across the entire region that receives heavy rainfall,” she added.

Jamison says she knows there is water still upstream that has yet to work its way into the system.

The flooding has impacted homes in Clinton, Massillon, and Canal Fulton.

As of Wednesday morning, at least sixteen roads across Stark County were closed because of high water.

Warstler says the most important message he can share is for motorists not to ignore road closings.

“Turn around, don’t drown,” advised Warstler, understanding the closures create delays and headaches, but understanding that under the high water there might not be a road.

Although the river level was starting to drop a bit during the day Wednesday, Warstler says he knows from previous flooding that residents can expect a “step” effect with additional rain in the forecast.

“There’s so much water that is still yet to work its way through the system so once we get additional rainfall, though the river is currently trying to recede, what we can anticipate is that the river may come back up and perhaps get into a different flood category,” said Jamison.

;v=f0kA_WOC6OY&feature=emb_logo EL PASO, Texas (CNN) - A Texas community hit by terrible tragedy months ago came together over the weekend to celebrate a survivor's first birthday. Paul Gilbert Anchondo was two months old when his parents died shielding him from a shooter at an El Paso, Texas, Walmart on August 3, 2019. Over the weekend, the toddler turned 1, CNN affiliate KVIA reported, and hundreds of residents drove in a parade to celebrate the…

(WJW) – More of Ohio’s economy will begin reopening this week. Here’s what to expect as things start to get back to business. POOLS While many cities and municipalities opted not to open pools this summer, those who want to open are allowed starting this week. Many employees will be wearing masks and may ask you to do so in public spaces. Facilities are expected to create barriers for social…