(CNN) — It’s a tale of two extremes across the country, with temperatures well below normal in the East and triple-digit highs pushing well above normal in the Southwest.

Seasonal whiplash will be felt over a large portion of the country, going from near-record highs to near-record lows in just a matter of a few days. We could likely see record-breaking heat on Thursday in the Southwest.

Around 25 million people are under some sort of heat watch, warning or advisory in the Southwest, including in Phoenix and Los Angeles. An excessive heat warning means that a period of scorching temperatures, even by local standards, is expected.

Phoenix will reach 105 degrees Fahrenheit on Thursday, with triple-digit temperatures lasting through at least Monday, making for a sizzling Mother’s Day weekend.

Near-record heat is expected in Los Angeles, where downtown is expected to reach the mid-90s the next few days. Death Valley could top 110 degrees Fahrenheit over the weekend.

On the flip side, the East will be feeling the chill, in a big way. “A strong push of cold air from Friday into Saturday will reinforce the cold air and bring conditions more like February as opposed to May,” CNN Meteorologist Dave Hennen said.

Dozens of records for the lowest high temperatures could be broken over the next few days. Detroit, Indianapolis and Louisville could all potentially break records early Saturday morning, with low temperatures in the upper-20s to low 30s.

Snow will likely fall over portions of the Great Lakes into interior sections of the Northeast from Friday into Saturday, where some accumulation is likely.

Here in Northeast Ohio, we are expected to see Lake-effect Friday. More on the forecast here. 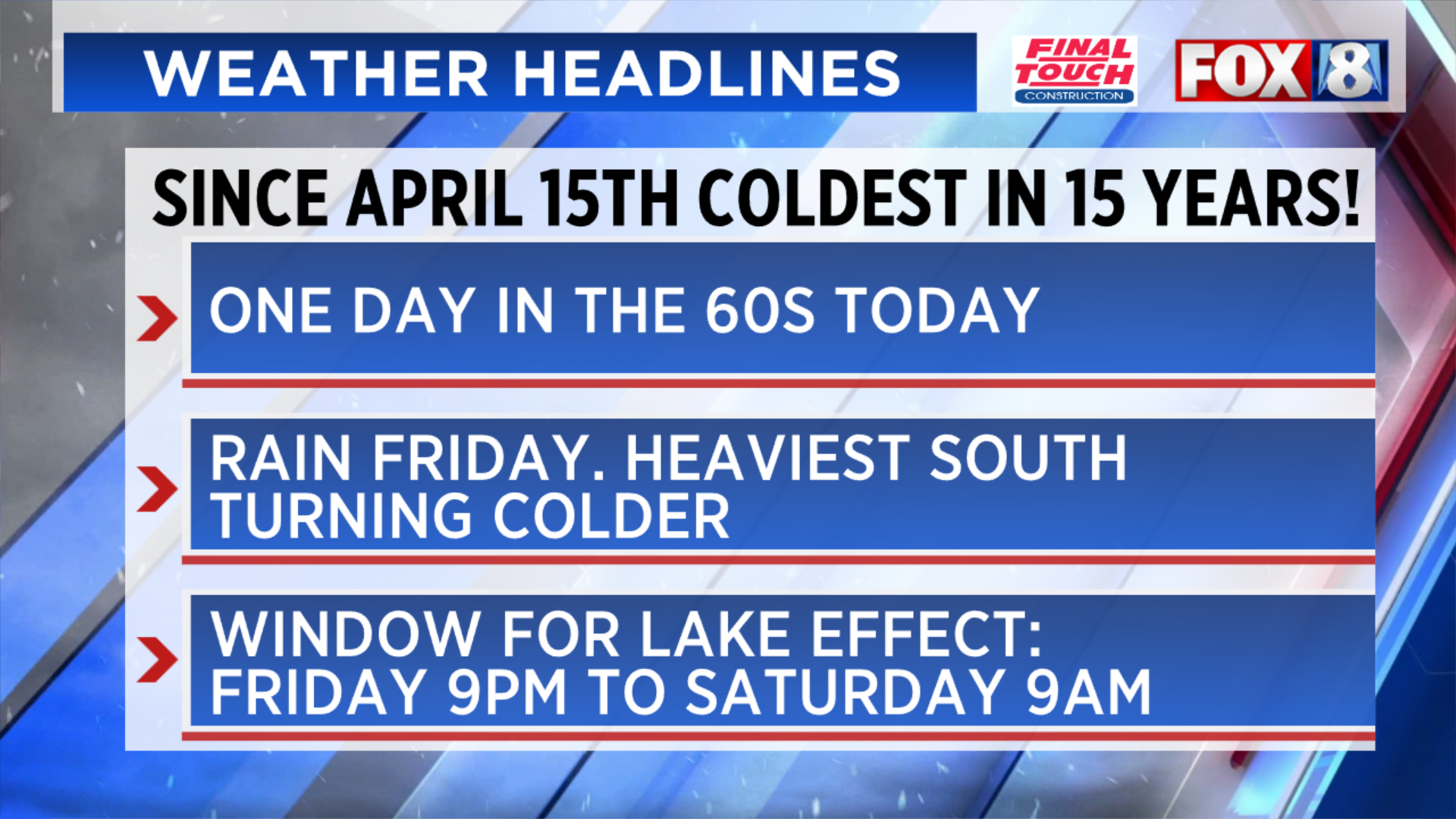 “It appears that interior New England will see significant amounts of wet snow with northerly winds becoming increasingly strong and gusty late Friday night into Saturday morning,” the Weather Prediction Center is forecasting. Temperatures in the Northeast will fall into the low to mid-30s on Saturday morning.

The possible record low high temperatures will stretch as far south as Florida by Sunday. “Over 60 million people are under some sort of frost or freeze, watch, warning, or advisory,” Hennen says. Frost could kill sensitive outdoor vegetation if left uncovered. Blame the cold on a weak polar vortex The polar vortex was so strong this winter and spring it lead to the largest-ever Arctic ozone hole, but not big outbreaks of cold weather.

The polar vortex, as its scary name suggests, is a circulation of strong, upper-level winds that normally surround the northern pole, moving in a west to east direction — a polar low-pressure system. These winds tend to keep the bitter cold air locked in the Arctic regions of the Northern Hemisphere.

It’s not a single storm. On occasion, this vortex can become distorted and dip much farther south than you would typically find it, allowing cold air to spill southward. But it didn’t spill out into the US this winter. That’s why the spring and winter have been mild and major East Coast cities saw low snowfall amounts. In the past few weeks, the Arctic ozone hole repaired itself. Now the polar vortex is weakening, allowing Arctic air to spill out — leading to plunging temperatures in the East this weekend.

*Watch Gov. DeWine discuss security preps at the Statehouse in the video above.*

WASHINGTON, D.C. (AP) -- The threat of extremist groups descending on statehouses across the country in demonstrations Sunday prompted some governors to roll out a massive show of force and ramp up security, less than two weeks after a mob overran the nation's Capitol.

CLEVELAND (WJW) -- The jackpot just keeps getting bigger for Powerball after no one matched all six winning numbers in the drawing on Saturday night.

LOS ANGELES (AP) — Phil Spector, the eccentric and revolutionary music producer who transformed rock music with his “Wall of Sound” method who later was convicted of murder, has died at age 81.

Facebook banning ads for gun accessories until after Inauguration Day

‘It’s like full circle’: Family reunited with dog after 12 years

Cloudy skies with chance for snow showers, temps in the 30s

Here are the winning numbers for the $640 million Powerball jackpot

MetroHealth begins administering COVID-19 vaccines to those over 80

State capitols, including in Ohio, boarded up and patrolled by troops

Cleveland police investigating after woman pushed out of vehicle, killed