AKRON, Ohio – It’s considered one of the most exciting weeks of the year in the Akron/Canton area.

Events this week include everything from the opening of Lebron James’ new school to sporting events that bring in some of the best athletes in the world. 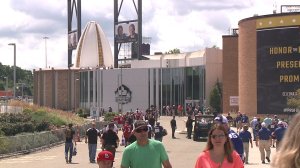 It might be hard to believe, but the NFL preseason already kicks off this week. Thursday night the Ravens and Bears play in the Hall of Fame game in Canton. Canton`s enshrinement ceremony is Saturday. The annual event is big business for local hotels and restaurants.

The tournament draws eyes from around the globe.

“We’ll have over 400 credentialed media from all over the world. We’ll be broadcast worldwide to over 220 countries. It’s one billion potential households. It’s really a great way to showcase all of the great things we have going on here in Northeast Ohio,” said tournament executive director Don Padgett.

Padgett said the tournament raises a million dollars every year for local charities.

On Monday, the future of kids will be the focus in Akron when Lebron James’ much anticipated I Promise school opens. Lebron`s school offers full scholarships to the University of Akron for students who complete the program.

and it doesn't get bigger than opening day tomorrow (until the next thing we dream of 🤣) I'm so unbelievably proud and excited to see my kids, my home, and the 330 tomorrow. THANK YOU! Let's get it. Let’s go 💪🏾 @IPROMISESchool #WeAreFamily #IPROMISE

Unfortunately, this will be the last year Akron hosts the Bridgestone Invitational. The PGA is moving the event to Memphis next year. Firestone will get another tournament.

LAS VEGAS (AP) — One of the biggest casino projects ever on the Las Vegas Strip has set a date to open, after more than seven years of planning and building.

Resorts World Las Vegas announced Monday that it will open to the public June 24 and began taking reservations for more than 3,500 rooms at its three Hilton-branded hotels.

ASHLAND, Ohio (WJW)-- Ashland County Sheriff's deputies filed several charges against a man who is accused of driving while intoxicated in the same parking lot as a mock crash Friday morning.

Mark Fulk is being held in the Ashland County Jail and is facing several charges including operating a vehicle under the influence, aggravated menacing, resisting arrest and inducing panic.

MINNEAPOLIS (AP) — Former Vice President Walter F. Mondale, a liberal icon who lost the most lopsided presidential election after bluntly telling voters to expect a tax increase if he won, died Monday. He was 93.

The death of the former senator, ambassador and Minnesota attorney general was announced in a statement from his family. No cause was cited.