SIMI VALLEY, California — The stage is set, and the tension is building for the second Republican presidential debate which will take place tonight.

Ohio Gov. John Kasich will again take part in the 8 p.m. debate, which will air on CNN. 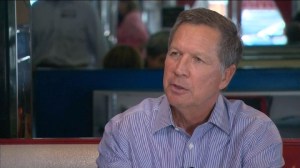 **Check back with Fox8.com for a LIVE blog of the debate**

In the most recent Monmouth poll, Kasich is among the few candidates in double digits; he had a four-point bump in the numbers. In New Hampshire, Kasich is earning 11 percent support from GOP voters.

In the first GOP debate held in Cleveland, Kasich got a bump in the polls after he said that America’s economic growth needs to be felt by everyone, including “people who feel they don’t have the chance to move up.” 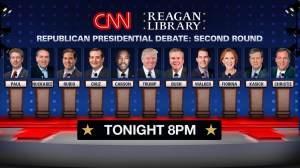 Republican voters nationwide continue to back Trump in large numbers, climbing from 23% support in the last CBS poll, conducted before the Fox News debate last month, to 27% in the poll out Tuesday. But Carson rocketed in that same period from 6% to 23%. The survey also found Carson doing well across demographic groups, edging out Trump among college-educated Republican voters.

The rest of the field, with the exception of Carly Fiorina and Ohio Gov. John Kasich, has slipped behind with Wisconsin Gov. Scott Walker falling farthest from 10% support last month to 2% now.

Trump will play the lead role tonight — but his rivals are jockeying to steal his spotlight.

As the GOP’s front-runner, Trump will once again take center stage at the Ronald Reagan Presidential Library. With Reagan’s Air Force One as the backdrop, Trump will be flanked by retired neurosurgeon Ben Carson and former Florida Gov. Jeb Bush, who has been increasingly eager to take on the combative businessman.

Meanwhile, one newcomer to the prime-time debate — Carly Fiorina — seems poised and ready to take on Trump directly.

With the Iowa caucuses less than five months away and pressure mounting for the middle-tier candidates, the CNN debate offers an opening for candidates to deliver a presidential performance — and avoid getting lost in the Donald Trump show. But a misstep could damage their presidential prospects.

Here are a list of things to watch in tonight’s debate:

What will Trump say this time?

The question isn’t whether Trump will shock and awe — but how?

At last month’s GOP debate, the wealthy real estate magnate had the audience both booing and cheering within minutes of taking the stage, when he refused to rule out a third-party run and took a shot at comedian Rosie O’Donnell.

His unorthodox performance has only fueled his popularity — his national numbers have gone up and he’s leading in key states like Iowa and New Hampshire.

But while Trump will no doubt deliver another explosive performance Wednesday, the debate stage this week will probably feel more hostile than last time.

In the six weeks since the first debate in Ohio, Trump’s rivals including Bush, Carson, Fiorina and Rand Paul have grown more confrontational, more willing to air their grievances against the frontrunner.

“Donald Trump is the debate’s Rorschach test — every competitor sees something different in him,” said Ron Nehring, Ted Cruz’s California state chairman. “Now that things are getting more serious and some of the weaker candidates are under financial pressure to move up or drop out, it will be interesting to see how they respond.”

In a Tuesday interview on CNN’s “The Lead,” Paul said he would highlight Trump’s past positions on issues like eminent domain, Obamacare and taxes that will make conservatives uncomfortable.

“When Americans know that, when conservatives know that, they’re going to run away with their hair on fire,” Paul said.

Can Fiorina do the impossible — and upstage The Donald?

With a standout performance at the first GOP debate and a subsequent uptick in the polls, the former Hewlett-Packard CEO won a spot at the main debate alongside her top-ranking rivals. With her quick, effortless delivery and sharp attack lines, Fiorina seems one of the best equipped in Wednesday’s lineup to take Trump head-on.

Dan Pfeiffer, former adviser to President Barack Obama, said Monday on “The Lead” that Trump may be better off staying away from Fiorina altogether.

“She is potentially the biggest threat to his being the nominee because she has all the resume of the outsider, not in elected office, but has more traditional experience — seems less risky than Donald Trump or Ben Carson,” Pfeiffer said.

Off stage, a battle between the two rivals is already brewing. Trump seemingly mocked Fiorina’s looks in a recent Rolling Stone magazine interview, saying: “Look at that face! Would anyone vote for that?”

Fiorina shot back: “I am proud of every year and every wrinkle.”

It’s not just Fiorina’s face that has come under Trump’s attacks.

“She goes down as one of the worst (CEOs) ever,” Trump said last week, a reference to Fiorina’s controversial tenure as the CEO of HP.

The company was back in the headlines Tuesday, announcing plans to slash some 25,000 to 30,000 jobs.

What hand will Carson play?

Carson’s devout faith is one of his most powerful political assets.

A Seventh Day Adventist, Carson speaks openly about his spiritual beliefs on the campaign trail. His appeal to evangelicals is proving to be particularly potent in a state like Iowa, which has a sizeable population of born-again Christians.

It’s also providing a contrast against Trump, whose religious background has recently come under scrutiny.

“By humility and the fear of the Lord are riches and honor and life and that’s a very big part of who I am. I don’t get that impression with him,” Carson said of Trump last week. “Maybe I’m wrong, but I don’t get that.”

Although Carson quickly walked back those remarks, he nevertheless exposed an area of potential vulnerability for Trump that any of his rivals could choose to revive at this week’s debate.

Under fire from Trump for lacking charisma, Bush is trying to ditch his old self. The new Bush is more confrontational, personable and energetic.

The reboot signals an acknowledgment that taking the backseat and waiting for Trump’s campaign to implode is — at least right now — a losing game.

The second debate comes at a particularly crucial time for Bush. Once presumed to be the party’s frontrunner, his national numbers are now stuck in the single digits. The question is whether his efforts will translate in front of the cameras on Wednesday, particularly next to Trump’s colorful personality.

As Bush attempts to be a more assertive candidate on the trail, the pro-Bush super PAC, Right to Rise, is laying down $24 million for ad buys in Iowa and New Hampshire.

A new Web video from the group offers a glimpse of the contrast Bush may try to draw between himself and Trump. It labels Trump as a candidate “in a very dark place” — then presents Bush as the candidate choosing a “brighter path.”

Can Scott Walker salvage his campaign?

He was supposed to be an A-list candidate.

But these days, Walker is simply trying to stop the slide in his poll numbers.

The Wisconsin governor has lost his lead in Iowa, a state now dominated by Trump. Only 3% of GOP caucus-goers in the Hawkeye State said they were supporting Walker in a recent Quinnipiac University poll.

His national prospects have also taken a serious hit: His support has dropped to 2% from 11% earlier in the summer, according to a new ABC News/Washington Post survey.

Walker is promising a more memorable performance tonight: “We’re going to step it up and be more aggressive this time,” he told CNN over the weekend.

The alarming headlines emerging from Europe about a deteriorating refugee crisis will serve as a real-time foreign policy test tonight.

It’s a politically thorny issue for both Republicans and Democrats, with the public split on how the country should respond to the flood of migrants fleeing chaos in countries such as Syria and Iraq. While more than half of Americans support the U.S. taking in some of the refugees, that view is far less popular among Republicans, with 55% of them opposing that idea, according to a new CNN poll this week.

The issue will be more challenging for political newcomers like Trump and Carson to navigate than some of their more seasoned policymaker rivals like South Carolina Sen. Lindsey Graham.

Asked whether the U.S. should consider letting more refugees enter the country on CNN’s “The Lead” on Monday, Carson warned that doing so would pose a terrorism risk.

“We don’t know who those people are, and the majority of them are young males, and they could easily be people who could be infiltrated by terrorists,” Carson said.

Do or die for the undercards

Former Texas Gov. Rick Perry became the first GOP candidate to end his White House campaign last week after languishing for months at the bottom of the polls. His exit, coming just a few months out from the first caucus, was a gut-check moment for the other bottom-tier hopefuls: The clock is ticking. 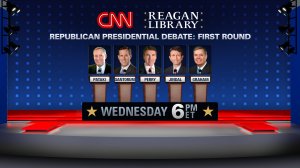 A lackluster performance Wednesday could doom these underfunded and lesser-known candidates.

“The JV debate is likely the last,” said Katie Packer Gage, deputy campaign manager for Mitt Romney’s 2012 campaign. Packer Gage is neutral in the race, but she is founding partner of WWP Strategies, which works for GOP presidential candidate Marco Rubio in Michigan.

“There will be so little attention to those folks that the networks won’t continue it,” she said. “So this is the last chance for the lesser known candidates to make a move.”

‘We are ready’: Cleveland football team hopes to …

‘The need is huge this year’: Nonprofit looking for …

Will anything be done to stop Hopkins Airport intruders?

‘These criminals are pretty savvy’: Police warn of …

Hopkins Airport breaches: Will anything be done?

Even though Black Friday and Cyber Monday are over, …

These 25 deals were the most shopped among BestReviews …

The best gifts for 5-year-olds

The best gifts for 10 year olds