CLEVELAND - Security zones will extend to the waterways surrounding downtown Cleveland during the Republican National Convention, meaning restrictions for everything from kayaks to large commercial ships. 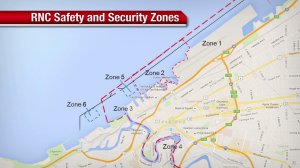 The U.S. Coast Guard announced four security zones will take effect from Friday, July 15 to Friday, July 22. The zones stretch from just east of Burke Lakefront Airport west to Whiskey Island, within the break wall. The zones also include the Cuyahoga River south to the George V. Voinovich Bridge.

Two additional zones, called safety zones, will be located north of Whiskey Island and northwest of the Rock and Roll Hall of Fame and Museum for protesters on boats.

"The whole concept is you want these things to go off safely, and to do that, you have to secure areas of the waterfront, or river in this circumstance, when there are certain activities going on," said Capt. Brian Roche, commander of the U.S. Coast Guard section based in Buffalo that includes the Cleveland area.

The zones are an effort to prevent terror attacks and other security threats on the river near the convention site at Quicken Loans Arena, as well as venues including the Rock and Roll Hall of Fame and Museum, Great Lakes Science Center and Burke Lakefront Airport.

Roche said the zones will remain open to boaters most of the week.

"We only use them if we need to," Roche said. "Really the only time those waters will be restricted access is when there's an event going on, not during the entire week of the Republican convention."

He said boaters should still be able to access portions of the river. Much of the attention will focus on the section near Quicken Loans Arena.

"When there's activities going on there, the waterway near there will have restricted access, but when it's not going on, the river is wide open," Roche said. "At this point, the Flats is an area I don't see us securing at all unless something unexpected happens that we have to do that."

Hundreds of extra Coast Guard personnel will be brought in during the RNC to assist with enforcement, Roche said, and boaters who accidentally enter a restricted area will be escorted out.

Commercial ships including the Goodtime III and those heading to the Port of Cleveland can seek clearance to enter restricted zones. Roche said Coast Guard crews will board ships to escort them.

"We do expect our ships that are scheduled to come, to come in and leave on time in coordination with the Coast Guard," said Port of Cleveland Vice President of External Affairs Jade Davis, adding that he expects little interruption due to the convention.

Small vessels, including kayaks or canoes, are also subject to the restrictions.

"I think that it's good for security for the downtown area because there's going to be so many people, and you don't know what's going to happen down there. But it's also restrictive to people who enjoy the waterways to use them every day," said boater Robert Smith, adding he'll be extra vigilant that week.

The Coast Guard will announce the times the restrictions take effect on marine radio, in press releases and in pamphlets distributed before the convention, Roche said.

New stimulus check plan would give even more money to families