CANTON, Ohio — A public memorial service was held in Canton today to remember Jethro, the K-9 officer killed in the line of duty this past weekend.

The memorial started at noon in the Canton Civic Center.

The man accused of shooting Jethro is Kelonte Demorious Barefield, 22. He was released from the hospital on Wednesday after being treated for injuries he sustained the night of the shooting.

He is now being held at the Stark County Jail and is expected to be arraigned Friday.

He has been charged with aggravated burglary, assaulting or harassing a police dog, felonious assault on a peace officer, having weapons under disability and shooting on or near a prohibited area.

Police returned fire, shooting Barefield in the leg. Barefield was in the hospital for four days.

Jethro died from his injuries the next day. 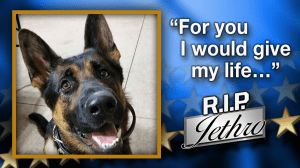 Jethro’s partner, Canton Police Officer Ryan Davis, said earlier this week he feels as though a part of him is missing since the death of his dog. Davis said he got the dog when Jethro was just eight weeks old.

“There is no doubt in my mind that I am here because of what he did, “ said Davis.

Several departments were expected to be at Jethro’s memorial, including some from New York City, Toledo, Warren, and Weathersfield.

Person hit and killed by semi on I-77

Person hit and killed by semi on I-77

Pedestrian hit and killed on I-77 in Bath Twp.

These NE Ohio businesses were approved for sports …

Areas of Cleveland infested with invasive bug; How …

Inside look at documents FBI agents are seeking in …

Jewish Cleveland gets the newest in tech for 24-hour …

Northern lights could show up in the night sky tonight