MAYFIELD HEIGHTS, Ohio - The man accused of murdering a woman and setting fire to her home, killing her daughter, appeared in court Wednesday morning. 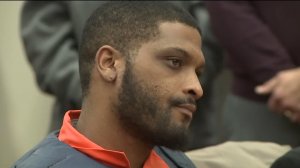 During a previous hearing in Lyndhurst Municipal Court, a judge set his bond at $5 million.

In Swopes' arraignment Wednesday, another judge upheld that bond amount.

He appeared via video conference.

His pretrial has been set for December 10 at 9 a.m.

Firefighters responded to the blaze on Longwood Road in Mayfield Heights on Nov. 20. They found Rebecca Pletnewski, 41, dead inside and pulled her daughter from an upstairs bedroom. Olivia Schneider, 8, was taken to a hospital, but died of smoke inhalation.

Pletnewski, a nurse at University Hospitals Cleveland Medical Center, was stabbed to death prior to the fire, according to investigators. Court documents said Swopes also disposed of Pletnewski's rings.

Police Chief Fred Bittner said Swopes, a neighbor, became a suspect after speaking with the victim's family members. They said Pletnewski was worried about his stalking and unwanted advances.

Pletnewski leaves behind a 4-year-old daughter.

President Trump, Ivanka made donations to Harris’s campaign in 2014

SAN FRANCISCO, California (KRON) - President Donald Trump and his daughter Ivanka donated money to re-elect Senator Kamala Harris as Attorney General back in 2014, according to records.

Three donations were made under their names for thousands of dollars:

According to East Cleveland police, officers responded to a call of a man who had been shot in the face at the 15400 block of Euclid near a gas station.

CLEVELAND (WJW) — Denzel Ward knows the intense feeling of putting on the Ohio State Scarlet and Gray, and then running out onto the Horseshoe turf in front of more than 100,000 fans. His dream was to be a Buckeye and he continues his football dream heading into year number three with his hometown Browns.

But Ward is hurting for lots of guys who know that feeling of playing Big Ten football for one of Americas best football programs.

President Trump, Ivanka made donations to Harris’s campaign in 2014

I-Team: Why are there so many unfilled Cleveland Department of Health jobs during a pandemic?

Priest at St. Maron Church in Cleveland says he has COVID-19

Kids and COVID-19: What Ohio doctors are saying about spread, school safety