"Our politics have conspired to make it as easy as possible for a terrorist or even just a disturbed individual to buy extraordinarily powerful weapons, and they can do so legally," Obama said after visiting families and friends of the 49 people killed at an Orlando gay club on Sunday.

Following his meeting with families and survivors, Obama and Vice President Joe Biden met with the owners and staff of Pulse nightclub who were working on site when the attack occurred. Two members of the Pulse staff were killed in the attack. Obama and Biden also placed 49 roses on a memorial in downtown Orlando. "Today, once again, as has been true too many times before, I held and hugged grieving family members and parents and they asked why does this keep happening? And they pleaded that we do more to stop the carnage. They don't care about the politics. Neither do I." 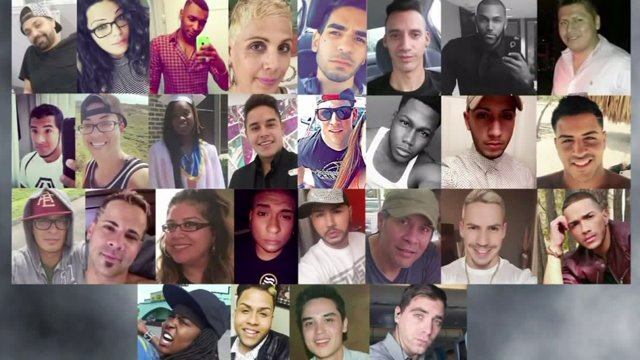 Obama has traveled to the sites of at least nine mass shootings in the United States during his two terms, including three in the last year, to meet with families of the dead.

The Orlando shooting is unique, though, both in the scale of the tragedy -- the death toll makes it the worst mass shooting in U.S. history -- and the shooter's ties to global terror. Obama said this week the shooter had pledged allegiance to ISIS but didn't appear to be directed by the organization.

It targeted a gay nightclub, with many of the victims gay and Latino. That has further escalated the debate following the attack, which has struck on a series of charged political and cultural flash-points of Obama-era America.

**Continuing coverage on the Orlando tragedy**

Aside from families, Obama was visiting survivors of the terrorist attack, many of whom suffered serious injuries but emerged from the massacre alive.

Prior to their meeting with families and survivors, Obama and Biden met with local law enforcement officials to thank them for their actions in responding to the attack at Pulse nightclub, according to the White House.

Florida Sen. Marco Rubio, a former 2016 GOP presidential candidate, accompanied Obama on his flight in a demonstration of the President's interest to "show solidarity," according to the White House. Gov. Rick Scott, a Republican, greeted Obama at airport, as did several other local officials. Obama called the governor Wednesday.

When Obama arrived, Orlando Mayor Buddy Dyer presented him with a black t-shirt emblazoned with a rainbow-colored heart and the words #OrlandoUnited.

Back in Washington, however, lawmakers paused in efforts to pass gun control legislation, something the Obama administration has backed and the President spoke to in the wake of the Orlando shooting.

A senior Democratic aide told CNN that votes will most likely happen next week, and they are looking at two Democratic amendments concerning the terror watch list and background checks as well as two GOP amendments. Republican Sen. John Cornyn of Texas told CNN that the Senate will hold a series of votes on gun amendments Monday.

Hours before Obama's plane touched down in Orlando, Democratic Sen. Chris Murphy ended his high profile, 14-hour filibuster calling for votes on gun control legislation. Republican leaders in Congress have stood by their stance that gun control is not the key to fighting homegrown terror threats, but their party's presumptive presidential nominee Donald Trump tweeted Wednesday that he planned to meet with the NRA to discuss "not allowing people on the terrorist watch list, or the no fly list, to buy guns."

At some point Thursday afternoon, Obama is expected to deliver brief remarks to reporters about his experiences and to "make clear that the country stands with the people of Orlando, stands with the LGBT community in Orlando as they grieve for their loss," according to Earnest.

Obama has described the private moments meeting with grieving families as some of the most wrenching of his tenure, a job his aides say requires him to draw on his religious faith.

In the last 12 months, Obama has met with victims' families in Charleston, South Carolina; Roseburg, Oregon; and San Bernardino, California. He's also traveled to Arizona, Texas, Colorado, Connecticut and the Washington Navy Yard during his presidency to mourn with families who lost loved ones in shootings.

WASHINGTON (AP) — President Donald Trump on Monday derided the nation’s governors as “weak” and demanded tougher crackdowns on protesters in the aftermath of another night of violent protests in dozens of American cities.

**For more on the protests in Cleveland, watch the video above**

According to the airline, this decision was made in effort to prevent further spread of the coronavirus, which was declared a global pandemic in March.