PORT CLINTON, Ohio (WJW)– The city of Port Clinton and people across Northeast Ohio are mourning the tragic death of Harley Dilly. 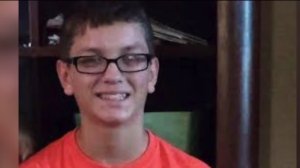 The 14-year-old, who was last seen walking to school Dec. 20, was found deceased inside the chimney of an unoccupied house directly across the street from his family’s home on East 5th Street.

Many neighbors and volunteers, who had tirelessly searched for Harley, broke down in tears Tuesday as police confirmed the awful news during a news conference.

“I don’t even know what to say anymore, we’re at a loss to think he was just that close,” said Marc Wolfe, who donated money to a reward fund and also searched for Dilly.

Erie Shores Assembly of God Church on Gill Road provided crisis intervention counselors with the group 46:1, named after the Psalm and said they’ll continue make them available for as long as needed.

“It’s gut wrenching,” said William Powell III, who is on the crisis intervention team. “We want to meet the needs of our community not just tonight, but throughout the upcoming months and years to come.”

Police have called Harley’s death a tragic accident and an autopsy determined the cause of death to be “compressive asphyxia.”

Hearing that was too much to bear for some neighbors who prayed for Harley and also participated is multiple searches.

“Just the thought of him being in that chimney all these days,” said Dana Deer, who organized the first vigil for Harley. “Probably crying for his mom, that’s what’s bringing me to tears.”

Port Clinton Schools Superintendent Pat Adkins released a statement that read in part, “We are deeply saddened by the news regarding Harley Dilly. Our thoughts and prayers go out to the Dilly family.” Adkins went on to say that counselors were being made available for students and staff.

A public vigil and balloon release is also being organized and tentatively scheduled for Friday at 5 pm. We’ll release more details as they become available.

Now more than ever people said they want to pray for Harley and surround his family with love and support.

Who are Cleveland Browns’ backup quarterbacks?

Own a piece of local ski hill history