CLEVELAND– A six-month-old baby girl has died after being shot in the chest near East 145th Street and Spear Avenue.

Police say shots may have come from a nearby apartment building.  SWAT went inside the building in search of a suspect but no one was found inside. 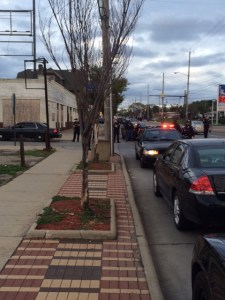 Cleveland Police Chief Calvin Williams spoke out Thursday night following the shooting and broke down in tears. He said enough is enough. “We will stay on this as long as it takes. We want bodies in jail tonight for this crime.”

Police set up a command center at 145th and Kinsman and said some houses were evacuated.

Surrounding districts in Cleveland are coming into the area to assist. They are also asking anyone with information about the shooting to call Crime Stoppers.

Stick with Fox 8 and Fox8.com for updates; click here for more on the investigation.

Woman captured after being accused of killing cyclist

Woman captured after being accused of killing cyclist

Where to see 4th of July fireworks in NE Ohio

Kenny’s all revved up for Monster Jam

Suspected arson at school in Lorain

Road closed after water main break on Madison between …

Hot, humid Friday with temps above 90

Where to see 4th of July fireworks in NE Ohio