HIGHLAND HEIGHTS, Ohio-- Highland Heights police are looking for a suspect who took an SUV with two young children in it in December.

A forensic sketch artist did a drawing of a potential suspect. 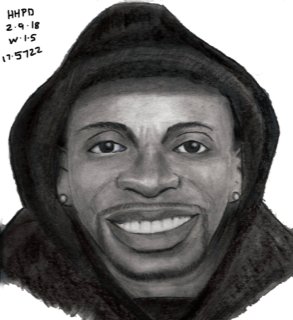 And the father of the boys is hoping the suspect is caught soon. Derek Driskell, 33, told us, it was a nightmare he will never forget.

It happened December 15 around 8:45 p.m., when Driskell stopped at a fast food restaurant in Highland Heights to get take-out. He said it was cold, and the boys were in the car watching movies so he thought he could run in, get the food, and run out.

He said he was in line and kept looking outside to check on his two boys, ages 3 and 7.

“I saw the suspect. He was a young African-American male. He saw me and laughed and kept driving,” Driskell told FOX 8 during an interview last month. “I was hanging on the door and getting dragged. I thought he was going to wreck and I didn’t want the car crashing with the kids in it, so I let go. I literally fell in the middle of the street.”

**Watch Peggy's past interview in the video, above**

Driskell ran to a nearby gas station and called police.

A few minutes later, the 3-year-old was forced out of the car. Erin Veshaj was driving on Wilson Mills Road and saw the boy in the middle of the busy street.

About 30 minutes later the 7-year-old boy was forced out of the car. He was found in a neighborhood on Cleveland’s east side. A woman brought him to Cleveland’s Fifth District Police Station.

Anyone with information may contact the Highland Heights Police Detective Bureau at 440-442-8825.

CLEVELAND HEIGHTS, Cleveland (WJW) — Authorities are reportedly increasing patrols across Cleveland Heights, after a man seen walking around the area with a rifle Saturday allegedly made a threat against Black people.

In a statement, police said they were called to the 3500 block of Blanche Avenue on Saturday at 4:30 p.m. after the man was seen there with the gun. Officers said that after talking with the man, they determined he was not breaking any laws. At that time, police spoke with witnesses and no one said they observed him threatening anyone or pointing his gun.

CLEVELAND (WJW) — Cleveland police are asking for the public's help in identifying suspects who they say were involved in aggravated robbery, assault and kidnapping.

On Oct. 12, police report that a woman was sitting in her car at the 3400 block of Hancock Road when two male suspects approached her vehicle. One of them reportedly held a gun up to her passenger-side window and told her "they just wanted her money." The suspect with the gun then got inside the woman's vehicle and told her to follow the man who had gotten in another vehicle.

Indiana jumped into The Associated Press college football poll Sunday after pulling off the weekend’s most dramatic upset and Ohio State moved up to No. 3 following a dominant season debut.

Clemson remained a rock-solid No. 1 and Alabama was No. 2. The Tigers received 52 first-place votes and the Crimson Tide got the remaining 10.

American support for same-sex marriage is higher than ever, study finds