It happened during a prisoner transfer between Lorain police and the Lorain Sheriff’s Office, according to Erie County Sheriff Paul Sigsworth.

The suspect got into the cruiser and took off. The pursuit went west on OH-113 through Birmingham and Milan, north on US-250 towards Sandusky and then north on OH-13 towards Huron.

Huron police set up spike strips and got one of the cruiser’s tires, Sigsworth said. The car went into the Thunderbird Golf Course and hit an embankment before ending up in a ditch. 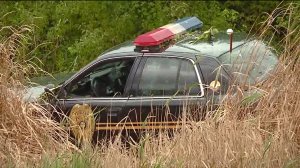 The suspect  was taken to a hospital. No one else was injured.

“Extremely dangerous situation. He was driving very, very recklessly and of course, the cruiser had firearms in it,” Sigsworth said. “Fortunately, the weapons were apparently secured, as they normally would be. He was unable to access those firearms.”

Christina Pettry, the mother of the suspect, told the FOX 8 I-Team her son has several mental health issues. She said she was trying to get him help.

“I told my daughter to call the Nord Center hotline and get him an ambulance because he was not acting right,” Pettry told FOX 8. “ The ambulance came and they said he was able to tell them his name, where he was, and he said he took his medicine. They said they couldn’t take him to the hospital because he appeared fine and if they did it would be kidnapping.”

She said the officer told her he was going to take him to the library so he could charge his phone.

“The officer must have then found he had a warrant,” Pettry said. She said the warrant stems from him failing to appear in court. She said he was unable to go to court because he was in the hospital.

She said shortly after he left the house with the officer Friday, she learned from others that he was leading police on the chase.

“All I wanted was for my son to get help,” Pettry said. “I was crying out for help because I was afraid he would hurt himself.”

Pettry said she feels the system failed her and her son.

Temps near 60? Lots of ups and downs this week