COLUMBUS, Ohio — Police have arrested a suspect who was with a 13-year-old Ohio boy shortly before the teen was fatally shot by a policeman investigating a reported armed robbery.

Nineteen-year-old Demetrius Braxton had told The Columbus Dispatch he was with Tyre King on Wednesday night and Tyre had sought to rob someone.

Columbus police say Braxton was arrested on a robbery charge Saturday afternoon. It’s not clear whether he has an attorney.

The case began when witnesses reported people had robbed a man of $10 at gunpoint Wednesday. 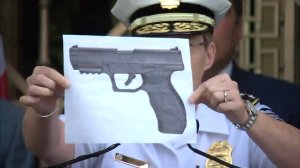 Braxton said he ran away with Tyre, and police told them to get down. He says they did, but Tyre got up and ran and was shot.

Columbus police have refused to comment on how that compares with police accounts of what happened.

Kirtland secures win in Game of the Week

Clase gets 40th save as Guardians beat KC

Deputies save woman in rushing water in Orlando

Kirtland secures win in Game of the Week

Clase gets 40th save as Guardians beat KC

Deputies save woman in rushing water in Orlando

Kirtland secures win over Perry Game of the Week …

Scores are in for Week 7 of Friday Night Touchdown

Ian bringing rainfall along east coast, but what …

Watch: Deputies save woman trapped in 10 feet of …

‘Highlight of my career’: Firefighters recognized …