A special board meeting is being held at Parma Senior High School Auditorium, where parents, students and families are voicing their concerns.

As the meeting was getting under way, someone asked Petro to “resign.” The crowd erupted in cheers; Petro then announced she was resigning and left the meeting.

As the meeting continued, Board members said they would ask the Ohio Department of Education for an extension for this fiscal year until the end of this month….and until January to figure out Fiscal Year 2018.

In addition, they would like to table the repurposing plan for now. Which means schools would stay open.

But, if these extensions are not granted, the original plan will go through, meaning that over 100 teachers could lose their jobs. 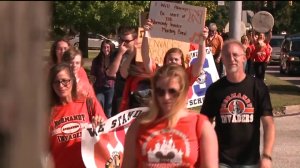 Hundreds of Parma City Schools students marched through the streets this afternoon, right before the meeting.

The Ohio Department of Education has placed the district under fiscal caution status and said the changes are necessary to keep the state from coming in and taking over.

Administrators from every Parma school were on hand at the meeting. Many voiced their concerns about the major problems the plan would cause. Among some of their issues were the number of students in study halls and home liaison cuts.

FOX 8 News and fox8.com will bring the very latest on this story.

CHESTER TOWNSHIP, Ohio (WJW) - Heavy snow continues to fall but the Ohio Department of Transportation has been working around the clock to keep our roads as clear as possible.

It was a snowy Sunday throughout Northeast Ohio. The Eastside saw their fair share of snow like in Chester Township. And over in Parma they had a rain snow mix with reports of thundersnow.

NASHVILLE, Tenn. (WKRN) – A Spirit Airlines passenger who assaulted multiple flight attendants, punching one and pulling another’s hair, was restrained by others on board with zip-ties and charged with public intoxication Saturday, according to an arrest affidavit.

Police received a call Saturday evening around 7 p.m. from the airline regarding a disruptive passenger on a flight arriving at Nashville BNA International Airport. Upon arriving at the gate, Spirit Airlines’ flight crew informed officers that a female passenger had punched a flight attendant and pulled another’s hair.

THE HAGUE, Netherlands (AP) — Cases of the omicron variant of the coronavirus popped up in countries on opposite sides of the world Sunday and many governments rushed to close their borders even as scientists cautioned that it's not clear if the new variant is more alarming than other versions of the virus.

Josh Duggar trial: A timeline of events and everything to know

Can you trust at-home COVID tests?

How long you can eat Thanksgiving leftovers

Man taken to hospital for gunshot wound after being carjacked, Cleveland police report