Skip to content
Watch Now
Watch Now
FOX 8 News in The Morning
This is an archived article and the information in the article may be outdated. Please look at the time stamp on the story to see when it was last updated.

NEW YORK – Um, well…..someone at the NBA may have just been “practicing” on the site’s Facebook event page and they hit publish. Or they are really big Golden State fans. Or they are able to see into the future.

Whatever the reason, on Sunday morning, the NBA had our Cleveland Cavaliers playing against the Golden State Warriors in game 1 of the NBA Finals on June 2. And then again on June 5 in game 2.

Of course, Golden State isn’t in The Finals yet.  The team faces off against the Oklahoma Thunder Monday night in game 7 of the Western Conference Championships. Whoever wins that will go to the Finals.

Someone with very keen eyes at SB Nation noticed the posting, and it has NBA “conspiracy” theorists gleefully sharing the picture. The same thing goes for very angry Oklahoma Thunder fans, but they are not gleeful. At all.

A quick check of the page later revealed that the NBA has deleted the entire rest of the NBA playoffs, although we’re pretty sure that will change again soon. 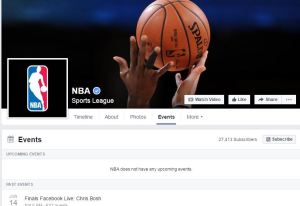 In any case, Cavs fans KNOW FOR SURE that our team IS playing on June 2 in Game 1 of the NBA Finals. So we’re good.

Myth or Fact: 90% of heart disease is due to lifestyle habits people can control

CLEVELAND (WJW) — When it comes to your health it can be overwhelming determining who to trust or listen to.

Dr. Marc Gillinov, a cardiac surgeon with the Cleveland Clinic, is helping us achieve our health and wellness goals by putting rumors to rest and setting the facts straight.

NEW YORK (AP) — Barbara “B.” Smith, one of the nation's top black models who went on to open restaurants, launch a successful home products line and write cookbooks, has died at her Long Island home at age 70 after battling early onset Alzheimer's disease.

(CNN) -- A Utah paint shop that specializes in motorcycles and classic cars has designed a customized casket for a fallen police dog.

Hondo, a K-9 with Herriman City's Police Department, was shot while assisting officers apprehending a fugitive in Salt Lake City on February 13. Hondo suffered a gunshot wound to the sternum and died at a nearby veterinary hospital.

Myth or Fact: 90% of heart disease is due to lifestyle habits people can control

Massive structure fire under control in Rocky River, I-90 back open to traffic

Rainy weather to start the week, warm temps will hang around