CLVELAND-- One person was killed in an early-morning house fire.

The victim was found on the third floor of the house and taken to MetroHealth Medical Center, where he was pronounced dead. 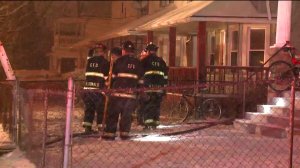 We spoke with some of the people who were able to escape the fire. They told FOX 8 News there were eight people in the multi-family home at the time, including a 4-year-old girl.

A man living on the second floor, Jamar Jason Ferrell, said he was awake when he started smelling fire and saw the smoke. He quickly woke up his family and got his 4-year-old daughter out safely. He then went downstairs to wake another family, who also got out safely.

He and another man, Jerry Carpenter, then tried to save their neighbor upstairs.

"I went downstairs to find a pry bar," Carpenter said. "Jamar and I then tried to get into the third floor apartment. We yelled, banged on the door, but had no response."

The smoke then got too bad so they had to get out of the house. The Cleveland Fire Department was able to get to the man on the third floor, but he did not make it.

"He was just a good person," Carpenter said about his upstairs neighbor. "He never bothered anybody, he was a good fashioned neighbor, a good person"

"He was a good neighbor," Ferrell said. "He always had a helping hand if we needed anything from him."

The families are not allowed back into their home right now. Red Cross is on scene helping the displaced families.

Fire investigators are trying to determine the cause of the fire.

LORAIN, Ohio (WJW)-- A surveillance camera was recording as a man vented his anger on an automated teller machine at a First Federal Savings of Lorain branch on Oberlin Avenue.

The video shows the suspect punching the machine several times. After attempting to complete a transaction, the man became more agitated and used his car door to bash the cash machine.

"Everyone is waiting for the governor to make a decision about when schools can be reopened and what the conditions for reopening are going to be," said Scott DiMauro, the Ohio Education Association President.

CHAGRIN FALLS, Ohio — It's just a bunch of two-by-fours, some incredibly thick plastic and a copious amount of duct tape.

But for Dan Sommers who hasn't been able to hug his 95-year-old mother Helen Goen in two months, it's the best thing in the world