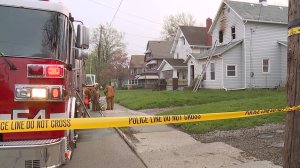 According to the Akron Fire Department, the fire started at about 4:45 a.m. Monday in the 900 block of Grant Street.

The home was being rented by four people. The deceased has been  identified as  26-year-old Kevin McCollum, a former interior design student at Akron. According to the university, the other three residents of the home were not current Akron students. Two were  former students and one never attended the university.

The fire started in a second floor bedroom. Firefighters were able to knock the fire down quickly, and McCullom was found in the bedroom.

The cause of the fire hasn't yet been determined.

The American Red Cross has been notified for the students displaced by the fire.

LOUISVILLE, Ky. (NewsNation Now) — Unrest continues for the second night after a Kentucky grand jury announced their decision in the March killing of Breonna Taylor.

All three Louisville police officers are cleared of all charges directly involved in the killing of Taylor. One of the three police officers was indicted but the indictment was for shooting his gun at Taylor's neighbor's apartment.

*Watch our I-TEAM report above on how the city is preparing for protesters.*

CLEVELAND (WJW) -- The City of Cleveland is releasing a list of items that will be prohibited while in the Presidential Debate event zone.

CLEVELAND (WJW) -- Officials have released the name of the man who was killed after an overhead sign fell on his truck while he was driving on I-480 this morning.

According to the Cuyahoga County Medical Examiner's Office, the victim has been identified as 62-year-old Daniel Ripepi.