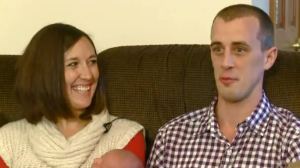 LOUISVILLE, Ohio - About two weeks before expecting their fourth child, Christy Brown was at home when she said she started to feel contractions.

"In the morning I had been having some contractions kind of on and off. They weren't real hard and they weren't real close together so I did some errands, ran to the bank did some grocery shopping things like that," said Christy.

Having had three other children she sensed things were not yet urgent, so she laid down and the contractions seemed to subside.

"It was like 11:30 or so and I had told Luke I had been having some contractions but they still werent real close together so I wasnt too concerned at that point."

About 2 p.m. her husband Luke took their oldest daughter Adeline, 5, to the library.

"I just decided to check in to see how she was doing so I just shot her a quick text and she texted back you know the contractions are stronger and I think we need to go to the hosptal," said Luke, who then got a more urgent call from his wife.

"It was maybe five, ten minutes after that that my water had broke and I actually called him and I said, 'you need to get home now,' " said Christy.

Luke said he rushed home, got his wife and their two girls in their SUV and headed to Mercy Hospital in nearby Canton.

"While on (route) 30 there was several times I feel the need to push and that's when I said something to Luke about that and he said, 'well if you need me to pull over tell me and we will pull over,' and at that point I was thinking in my head you know I don't think we are going to make it; it's going to be close," said Christy.

"My wife hollers out, 'he's coming, he's coming,' so I pull over to the shoulder. We're on (interstate) 77 so we have semis and trucks flying by us and so it's a little bit nerve-wracking in that sense but I pull over, turn on the flashers and I start to hear kind of a crying," said Luke.

Luke had been given the opportunity to assist in the delivery of their oldest daughter.  Given the option to either cut the umbilical cord or 'catch' her he says he decided to 'catch' since it was an opportunity that he may never have again.

That was five years earlier and there was a doctor coaching him through the experience.

This time there wasn't even enough time to call 911.

"To be honest, I really didn't have a whole lot of time to think so I wasn't really nervous or scared or wasn't really feeling any emotions. I was just reacting to the situation. She said, 'he's coming,' and like I said as soon as I pulled over and reached down he was there," said Christy.

"At the time I think so much of your focus is just on the present, like your body just does what it naturally does as a woman and definitely once he came out and, like Luke said, once we heard this crying and the screams, or whatever, we knew he was okay and it was almost like music to your years," said Christy.

"I'm just reaching down with my hands and just kind of with my hand kind of guiding him out in my hands and he's screaming and I hold him up and kind of patting his back a little bit and my daughters in back see him and the glow on their faces was just amazing," said Luke.

With seven-pound Ezra safely delivered, the Browns completed their trip to Mercy Hospital.

"There were so many things that could have gone wrong and when the baby came out screaming we knew that was a good sign,"  said Luke, adding, "the first thing that came to my mind was thank you, God, you know, God really had his hand in this situation and things could have really gone wrong and I think God really protected us."

But he admits it is an experience he would not want to have again.

“It’s not right, it’s been a tradition in Cleveland since 1901, why change it now, everyone wants to change history," said John Suncire of Akron.

AKRON, Ohio (WJW) -- The City of Akron has come up with a unique way to celebrate the Fourth of July, while still maintaining social distancing.

The Office of Integrated Development has organized a synchronized program of fireworks that will be launched from multiple locations, which include the Akron Executive Airport, Patterson Park Ballfields, Summit Lake, and the State Street Parking Deck downtown.

*Watch our report above on a possible mask mandate for Florida.*

(CNN) -- A case of a rare, brain-destroying amoeba has been confirmed in Florida.