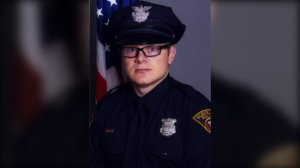 It will start with a motorcade in Columbus at 10 a.m. before heading to a training academy in London.

Attorney General Mike DeWine is expected to lead the ceremony.

Fahey, 39, was responding to a crash on Interstate 90 in Cleveland on Jan. 24, 2017. He was directing traffic when he was hit by a car and died of his injuries.

The driver, Israel Alvarez, was arrested and charged with aggravated vehicular homicide, DUI, failing to stop after an accident, and drug possession.

Police say Alvarez was high on cocaine at the time of the crash and say they found cocaine in his car.

Fahey will be one of four officers honored Thursday.

CLEVELAND (WJW) – Millions of Americans are ignoring warnings from the CDC not to travel this holiday week.

It’s a gamble Randy Roulette is willing to take.

Can you repeat that? Hearing trouble becomes more obvious with masks

DALLAS (AP) — As nurse Teri Wheat made her rounds at a Texas maternity ward, she began to realize she was having a hard time understanding the new mothers who were wearing masks due to the coronavirus pandemic.

So she got her hearing tested and now wears hearing aids.

DeWine received the update on the vaccination during a call with the White House and other governors on Monday.

Can you repeat that? Hearing trouble becomes more obvious with masks

These are the Thanksgiving foods safe for your pets to eat